To all the dads out there (including my own--Happy Father's Day, Dad!) Happy Father's Day!  Dave got cards this morning from Maya & Parker, and we celebrated with a ridiculous shopping trip.  For $2.16, we got all of this stuff (at the Container Store, Williams & Sonoma, Athlete's foot, and Gymboree).  Woo hoo!  (We had "free dollars", a gift card, and 2 exchanges.)  It was awesome.

(that's a pink toddler chair, 2 storage containers, one pair of Crocs, a t-shirt from Gymboree, and a Calphalon 10" pan)
It was also Parker's first trip to the Container Store, and the mall.  Earlier this week I summoned my best "fake it til you make it" courage and took him in to the bank and the post office here in the neighborhood.  Although the lady at the post office initially jumped off her stool to call out "Ma'am, ma'am, you need to get that dog out.  There are no dogs in here!"  I calmly replied "He's a service animal.  He has his vest on."  (Legally, the dog isn't even required to wear a vest, but it certainly helps make things easier) And she quickly said "Oh, I'm so sorry.  How can I help you?"

(it says "Service Dog in Training")
The mall was pretty similar.  A security guard, trailed by the head of security (both with walkie talkies) were on us after we were in the mall for about 1.5 minutes.  They asked me to remove the dog, but after I explained and they saw the vest they pleasantly left (and they must have radio'd out to everyone else, because no other security spoke to us).  At Williams & Sonoma we went through it again.  We also got many interested looks, and served as quite the conversation starter for the people we walked by.

Parker was a champ.  He was nervous and wanted to walk slowly, but some gentle reminder tugs got him to keep pace.  He did fine in all of the stores, and even the food court. 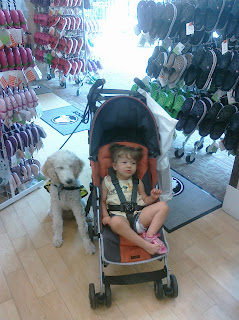 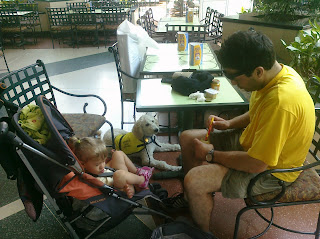 I'm having a hard time not feeling like a total imposter when we bring him out.  Since we've only done this twice, I'm assuming that I'll get used to it eventually.  My philosophical issue with it boils down to this:  He's not really helping us yet.  He's not "serving" or "working" when we're at the mall.  And I'm still not sure what needs/functions he will be trained to help Maya with, since we don't know what the scope of her delays/disabilities will be.
However, if we don't start acclimating him to these situations early, then it will become much more difficult to do as time passes.  And since we want him to pass the public access test, he needs exposure and habituation to as many scenarios as possible.  While shopping today, he had his first exposures to: shopping carts, racks of clothes, smells of stores (think of all of the smells at the mall!), a parking garage, smells/sounds of a food court, iron food court chairs shaking and sliding on the ground, waiting in checkout lines, walking past walls of glass windows where he kept seeing our reflection, echos, larger elevators, etc.  There's no way that I can mimic that without bringing him out.
I think I'll feel better about it when we start working on more service-y things.  Soon, hopefully.  Obedience stuff is progressing really well.  Tomorrow he's going to his first bbq (thanks for welcoming him, Sarita!) :)
To finish this off, a salute to Dave.  A fantastic dad, who loves to spend time with Miss Maya, and does the not-so-fun stuff (like diaper changes and difficult feedings) with the same enthusiasm that he does the fun stuff (like swimming, tickling, and making up silly songs).  He's the best.  Even though sometimes he doesn't know his own strength: 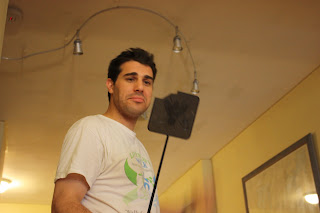 hooray for an awesome shopping trip!!!! free money is the best!!! mom taught you well!!! :)

with parker, he's just such a great dog! i'm glad that he's doing well handling the new environments. he's already been so good for maya, i can't imagine once he's actually doing the service stuff!

I love shopping smartly :) Even just using coupons makes me slightly giddy. On Friday we went by BRU and I got a free carton of diapers because I had a rewards coupon from buying other cartons---that one tiny rectangle coupon was worth 40.99 (!!!!)

I am a service dog user and I want to help calm your "fear of fakeing" nerves. I trained my own dog as well. When someone confronts you all you have to say is "It's a service dog in training." It is imporant to say the "in training" part so that they know he's not perfect but he's working on it.That protects the fully trained dogs reputation. One of the first things you can do is get him to pass a CGC test. It is basic manners and temprement, it seems as though he would totally pass. Then you can work on more advanced training and eventually pass a public access test showing he is sutible for public work. You will have to show 3 tasks to pass that test so it would be when she is older. But then you can take away the "in training." You're doing great keep it up! I see fakes all the time, you are someone working on doing it the right way. Thank you!!! :)