But the loveliest of all was the unicorn . . .

So earlier this week I blew my hair out.  I like it straight much better than curly (it's cooler, more manageable, etc.) but it's easier to notice the hair loss when it's straight, so I've been alternating.
Well, imagine my surprise when I've finished blowing it out, and I notice that I have a very unicorn-esque horn of hair sprouting up in the back: (See it?!  Right in the rear of my part) 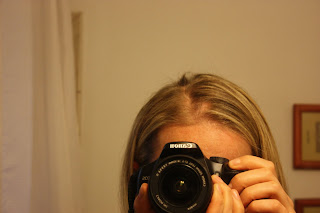 In a few more weeks it will be exactly like that dude from the Little Rascals: 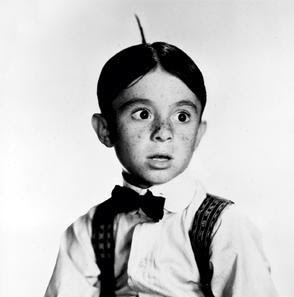 So I realize that this sprout of hair must all be new growth.
But it's a really thick patch . . .
so that must mean that there was a really big bald area . . . uh oh.
I called my mom to demand an explanation----had she seen it (it's too far back for me to see in the mirror)?  Why didn't she tell me?  Her response "Oh, I may have seen that one."  Sigh.  I grabbed the camera to give myself an aerial view, and confirmed that anyone taller than me must have been getting quite a view: 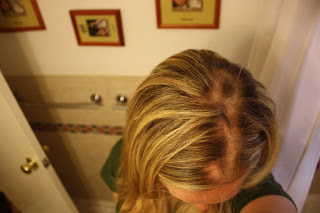 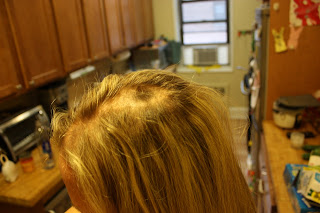 At least you can see the thick patch of new hair growing in.  But, man, imagine how big that must have looked with no hair!  Yikes! 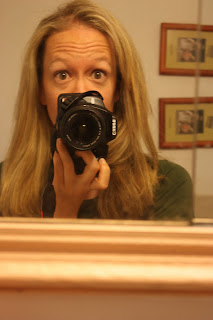 I returned to the dermatologist, eager to show off all of the new hair growing in, but she wasn't as impressed as I was (no fireworks or releasing of doves or anything).  She was somewhat concerned that I still have a a lot of hair falling out (join the club) so I was started on a course of prednisone in addition to the shots. (By the way, this time I tried to count the shots and got up to 56 before I gave up!)  Hopefully these steriods will kill off the rogue white blood cells that are attacking my hair follicles.
Posted by Dana at 6/13/2010 03:27:00 PM

well, i did not notice that bald spot at all, and not that i'm any taller than you are but we were sitting on the floor a LOT with the kids and your hair was straight at Maya's party and i did not notice anything!

summer is a good time to wear hats! you could go with the link i sent you!!