Once upon a time I spent months (slightly over a year, actually) searching desperately for an AAC system that could be used by my (very young) daughter immediately, yet grow with her into adulthood. It kept me awake at night. I spent all of my free time researching. I was completely consumed. And during this time an assistive tech specialist happened to say to me "Finding the system is the easy part . . . once you have it on the table in front of you  . . . that's when the real work begins."

I hated that I was drowning in "the easy part" . . . but he was right. You fight for a system, you get a system, and then you look at it and think, "Well then. So, um, here you go? Can't wait to hear all of the stuff you want to say! Hop to it!" The truth of the matter is simple, and I've heard the piano analogy used again and again to explain it to new AAC families/professionals: being given an AAC system doesn't make someone a proficient AAC user anymore than being given a piano makes someone a proficient pianist. There must be teaching, practice, and frequent use of the device/instrument.

The type of teaching that is, far and away, the most successful for AAC users is called Aided Language Input. No, it's called Aided Language Stimulation. No wait, it's called Modeling.  Actually those are just different terms for the same thing---and the main idea is simple: If you want someone to use an AAC device to communicate, you have to use the AAC device to communicate. If you want to help a user see how to locate words and build phrases, you must model how to locate words and build phrases. 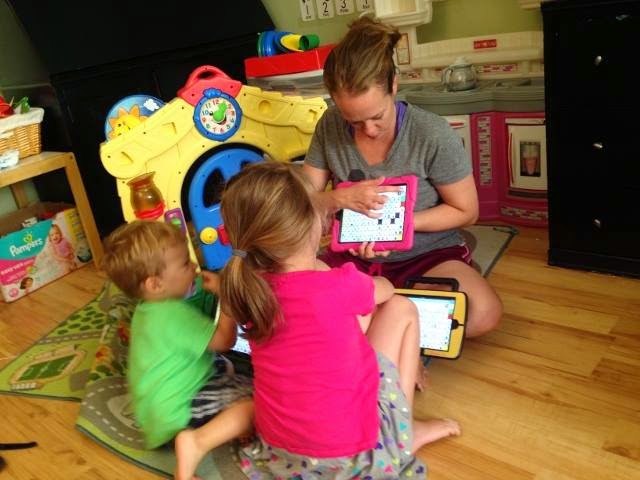 modeling for my kids (I'd rather sit next to them while modeling, but there had just been a who's-sitting-in-mom's-lap seating battle. 2 kids + 3 talkers + 1 lap does not = success)


Think for a second about the way that adults model language for babies--we expect that they will speak, and so we speak to them so that they have hours and hours of input before they begin speaking back:

Compare that to a child using AAC, who may only have modeling/teaching on the system during speech sessions (in this example, twice a week):


If someone is using a different symbol set and only has exposure to it two times a week, for 20 – 30 minutes each, it will take the alternate symbol user 84 years to have the same experience with his symbols that the typically developing child has with the spoken word in 18 months!!! -Jane Korsten

Shocking, right? The first time I heard that Korsten quote (which I broke into two pieces above) I wanted to run home and start modeling constantly in an attempt to even the playing field.

Here are a few resources about modeling/ALI/AlgS* to get you started:


*the abbreviation used for "aided language stimulation" is AlgS, so as to avoid confusion with amyotrophic lateral sclerosis (ALS).