Speak for Yourself is 50% off TODAY ONLY

This link will take you to a page with a link to a blog post that explains why this app tops the other big name apps: The Best Communication/AAC app.

And this link will take you to their iTunes page:  Speak for Yourself in iTunes.

Disclaimer(ish): The folks at Gripcase emailed me to see if I was interested in trying out their case and writing a review. Their timing couldn't have been better, as Will was starting to use our full-sized iPad and I didn't love our current case. This was the first time I've ever accepted a "would you like to try and review" offer, because I don't want to be advertise-y, and I'm not interested in trying a lot of things anyway. (Who has the time to try a lot of things?) But I had been intrigued by the GripCase since I saw Ellen's review (over at Love That Max) last year, so I thought, well why not. Turns out, I really like this case. I wasn't compensated for this review or my opinion, but I was provided with the case, their stand, and their carrying strap.

NOTE: This case was to be trialed on our iPad2 . . . formerly known as our "play iPad", now turned into Will's talker. Maya's talker remains housed in the amplified mini iAdapter, as I believe that dedicated AAC devices must have amplification (and the iAdapter is currently the only solidly amplified case).

When the Gripcase arrived, I was skeptical. 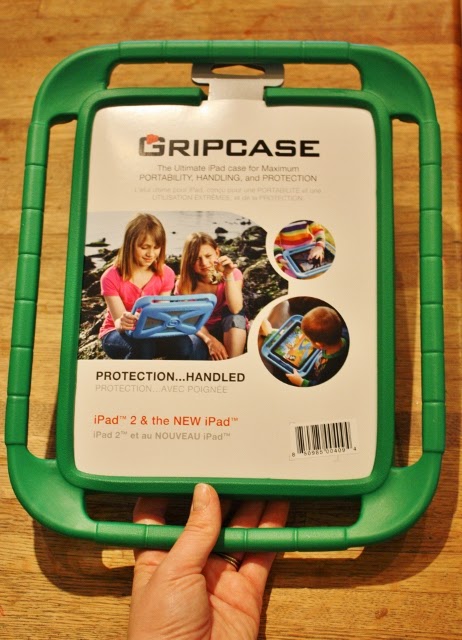 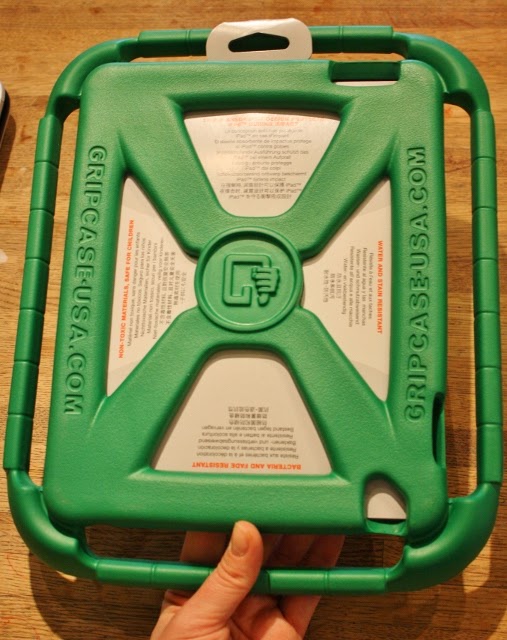 I couldn't find the instructions on how to install the iPad into the case, and then I realized that, quite simply, you just slide it in. So I did. And I thought "I never should have agreed to review this thing, because it feels like it is made of air and my iPad will surely be destroyed within the first hour of putting it on."  Remember now, this is an iPad2, our "play" iPad that had become Will's talker iPad. So the primary user of this device is an 18 month old boy. He literally does not understand the meaning of the word gentle.

But he couldn't wait to get his hands on it. 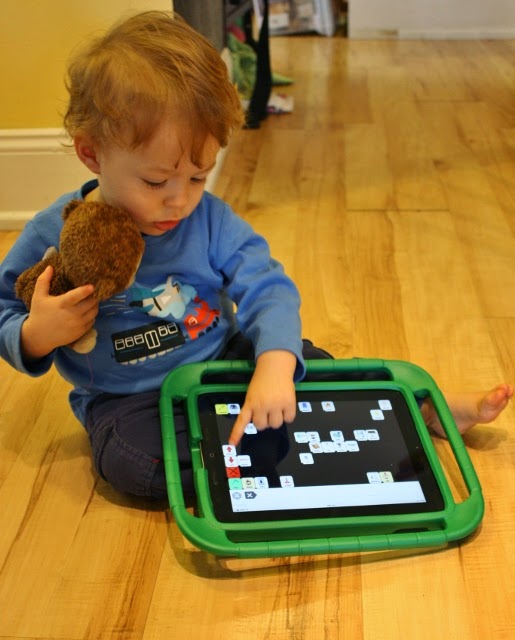 Or, rather, one hand, as the other was used for clutching of his little monkey.

And then he realized that it was light enough to run around with, and the handles made the running-and-carrying easy.

Then he took a break because he had important things to talk about. 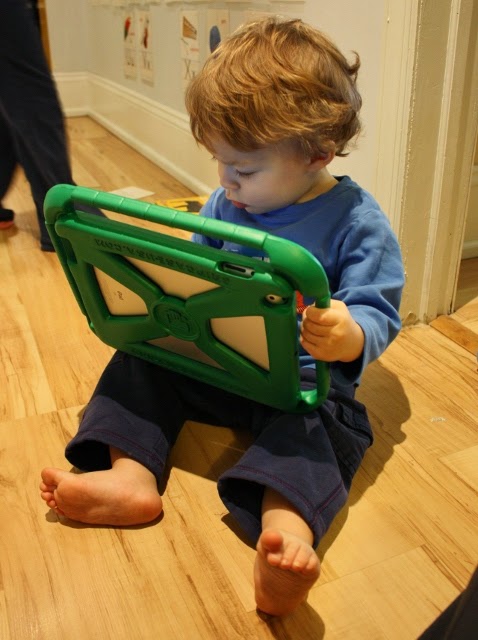 And the next morning we tried out using it with the stand: 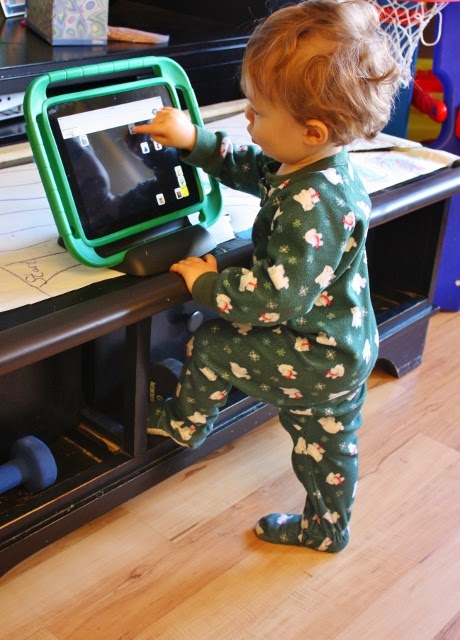 That's also when he realized that if Mommy is trying to take the iPad away, say, to take a picture of it, the handles are really great for tug-of-war: 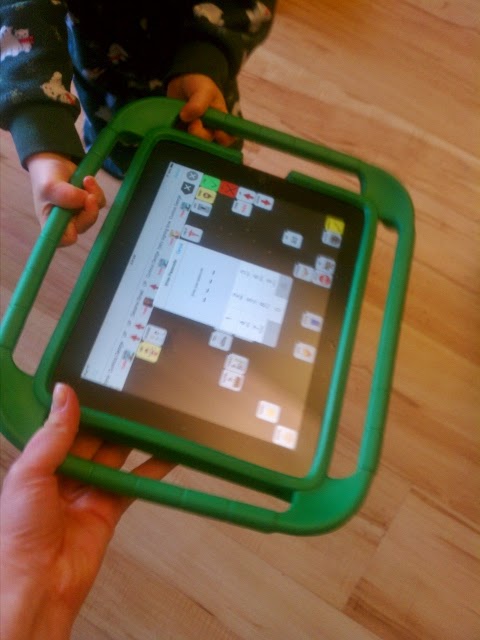 In the past we have used the following cases: the Otterbox Defender, the Griffin Survivor, the Gumdrop, the iAdapter and the iAdapter mini. As mentioned above, if you're using an iPad (or iPad mini) as a dedicated communication device, I recommend the iAdapter line. If you're using an iPad with kids for other reasons (or you're saving up for an iAdapter) then I think the Gripcase beats the other three mentioned above, easily. (We had used the Griffin Survivor on our iPad for the past 2 years, but we're sticking with the Gripcase now.) Here's why:

Weight: The Otterbox and Griffin are super-protective, but super heavy. Like, really heavy. The Gripcase is amazingly light. It's made of some foamy/rubbery material that feels like nothing. I was tempted to throw it like a frisbee (it would have gone far, but I am an awful frisbee thrower). 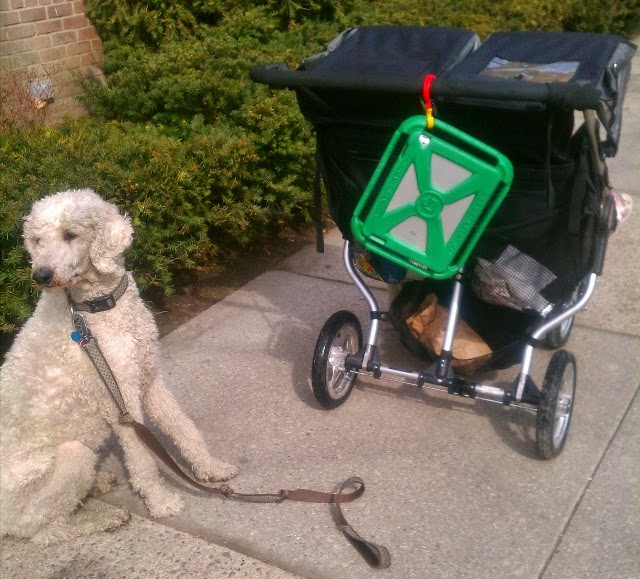 Handles: Those three other cases do not have handles. I didn't think about it before I saw it in action, but handle really (really) decreases the drop-ability of an iPad. Will can (and does) run around here at full speed while carrying the iPad behind him with one hand, and he rarely drops it . . .

Durability: . . . except when he drops it. Most famously, he will tuck the iPad between his car seat and the car door so that when I open the door to take him out . . . bam. Right to the ground, from SUV car seat height. It's happened an embarrassing number of times, along with a few falls from the couch, a few angry throws, and some general clumsiness. Also, he likes to stand on it. And, amazingly, not a scratch. When the iPad lands vertically (as in, the handles hit the floor) it bounces (really). And when it hits horizontally, it tends to land face down (which sounds bad, but it's got a concave shape so that the screen is held up off of the floor).

The Stand: It's sold separately, but it's really good. The Griffin stand snapped from us pushing the buttons on the communication app. This one is lightweight and really good. The only issue is that it doesn't fold or anything, so it might be a little bulky for travel. Small price to pay if you've gone through multiple flimsy stands, though. 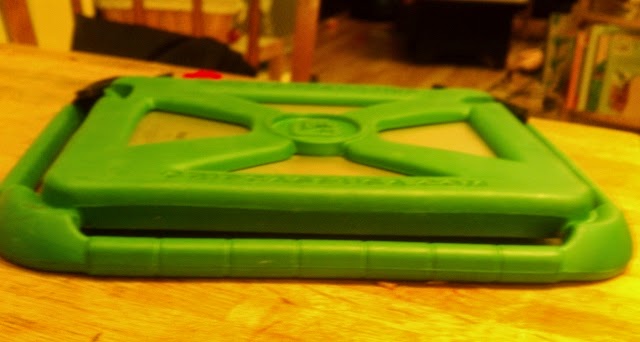 It's difficult to see, but the screen is actually lifted up off of the table here.

Screen protection: I bought a adhesive screen protector and put it on the iPad, because there's no component that covers the screen with this case. The Griffin Survivor has a hard plastic covering over the screen, but is lacking in the "pros" mentioned above.

Size?: I mention this because I was initially startled at how much bigger it seemed than the other cases. However, it still fits in a (standard size LL Bean) backpack and doesn't seem big anymore, but there was definitely a moment of surprise.

Amplification: I mentioned it above. For a dedicated device, you really need amplification. That being said, this case is definitely louder than the Otterbox, Griffin, or Gumdrop cases because they have a little cut-out so that the speaker isn't covered.

They sent us a carrying strap, which connects to the case in a really interesting novel way. This is what it looks like when attached. We generally keep the strap off, as Will is very short.

Also of interest: they have a "Buy One Give One" program in which they will donate a Gripcase to a school of your choice for every case that you buy. If you're buying for a school district, this would come in particularly handy.

Of all the cases we have on hand, our iPad is going to stay in the Gripcase, which is basically the biggest endorsement I can give it. I really didn't expect to like it as much as I do!
Posted by Dana at 4/10/2014 08:30:00 PM 3 comments: