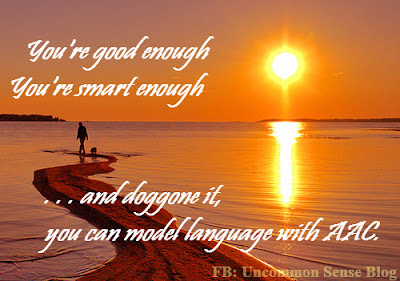 If you are a member of an AAC family, you have likely heard that the most important thing that you can do (after providing your child with a robust ready-to-support-language system and presuming competence) is model. Modeling (also known as aided language stimulation, aided language input, and ALgS) is when you use your child's AAC system to communicate, with several variations:

(words spoken via AAC are in bold)


Of course, you could also highlight words without speaking them, or build whole phrases/sentences while speaking them, or use a combination of single and dual device modeling, or probably a bunch of other possible modeling plans that I haven't listed.

(Is this starting to feel complicated?)

And then there's the question of which words/phrases to model. There's a lot of emphasis on core words and core vocabulary (core words = the words that make up the large majority of a person's vocabulary; including versatile, simple words like eat, push, go, stop, in, up, this, it) . . . but we also know that sometimes the stuff that gets our kids most interested in talking are the fringe words (names of tv characters, favorite toys, words like fart, poop, gross). And then there may be essential words/phrases/topics that we know are important for our child to start incorporating (communication repair phrases like That's not what I said, social interaction phrases like What's your name, questions, words to describe pain/seizures/medical conditions, introduction strategies, etc.)  Not to mention the wealth of questions that immediately arise as soon as you try to model:

For beginners:
For intermediate/advanced:

It can be overwhelming.

And yet, undeniably, modeling is essential.

Modeling provides children with accessible language input (input in a language that they will be able to access and then also use, whereas they may not be able to attempt to use the speech that they are hearing constantly). Children are immersed in speech from birth, but AAC users receive only a tiny fraction of that accessible language modeling in their AAC language. While many families can count on AAC to be modeled during weekly speech therapy sessions, consider these thoughts from Jane Korsten:

If someone is using a different symbol set and only has exposure to it two times a week, for 20 – 30 minutes each, it will take the alternate symbol user 84 years to have the same experience with his symbols that the typically developing child has with the spoken word in 18 months!!!

The typically developing child will demonstrate language competency around 9 – 12 years of age having been immersed in and practicing oral language for approximately 36,500 waking hours. For 9 – 12 years that child has been using and receiving corrective feedback while practicing with the spoken word.

At twice a week, 20 – 30 minutes each time, it will take the alternate symbol user 701 years to have the same experience.

If we are to make any sort of dent in closing that gap, AAC modeling needs to become something that we do at home (and in the grocery store, and while out on a walk, and in the doctor's office, and . . . you get the idea)---for AAC beginners, of course, but even for our intermediate/advanced users.


Here are some things that are great about modeling:

Things that are challenging about modeling (aka "reasons that maybe sometimes I don't want to model") and why those are also great:

Despite knowing how important modeling is, sometimes I drop the ball. ("Sometimes" has sometimes been for a while, for the record.) Sometimes it's hard to stay motivated. Sometimes life gets in the way, or I forget, or it starts to seem not that important. Sometimes we all need a jumpstart.

So here's my proposal: For the next 21 days, join me in committing to modeling with renewed vigor and enthusiasm. Do not worry about whether you are doing it "right", just do it. I will post daily threads on our Facebook page that provide an example of some type of modeling that I did that day (because sometimes simply seeing what someone else is doing is enough to have you thinking "Oh, that's it? I can do that."). I (strongly) encourage you all to jump in---post to the daily thread, check in, share pictures or stories from your day of modeling. Ask questions. Share ideas/activities.  Just keep going.

Once upon a time, I learned that it takes 21 days of doing something (like exercising or waking up early) to form a habit. When the idea of this AAC challenge sprang into my head, along with it came the 21 day time frame---perfect for forming the habit of daily modeling, I thought. Then I googled and learned that the whole 21-days-to-form-a-habit thing is an odd, non-scientific myth . . . but I think it's still a great amount of time for a challenge, so I'm sticking with it.

-How long do I need to model for it to count? 10 minutes? 30?
This is a made up challenge without points or prizes. You earn your "day" of modeling by actively deciding to model and jumping in. Extra imaginary points will be assigned if you model throughout the day. (I think this is the sort of thing where success compels you to do it more---I have found that making myself model actually makes me want to do it more.)

-I'm kind of new to modeling and don't know where to even start--help?
Here are a few great getting started resources:
Getting Started With Meaningful Modeling
Some modeling videos!
Simon Says: Model One More Word
More Modeling Resources

But remember, the whole point of this is just to get more comfortable with modeling, and to form the modeling habit----it doesn't have to be structured or magical, it just has to happen.

-My kid isn't a beginner anymore---is my modeling really that useful?
Yes. You are modeling how to be an active, determined AAC user in a fast-paced world. You can pick higher-level language targets (using comparative and superlative adjectives, using contractions, increasing the number of questions asked, taking a larger number of conversational turns, starting to use and introduction strategy, modeling sentences with active verbs and then their counterparts with passive verbs, etc etc etc) to model.

-This is a great idea, but  . . . (we're about to go on vacation//it's the first week of school//we are throwing a family barbecue this weekend//insert other life-gets-in-the-way excuse here) . . . maybe I could start next week instead?
No, you have to start now.

Ok, actually I am just some lady on the internet and I can't hold you accountable for anything . . . but I think you should start now. Life is busy, and it will always get in the way. Particularly for our AAC users, who have to stop, form an idea, find the words to say the idea (often dealing with motor challenges while doing that) and then communicate it. That's a struggle. It's not fair for us to think "gah, it's too hard to start today" while our kids have to do it everyday. Suck it up, buttercup.

Join me, guys. This is going to be really fun!

I'll share a few bonus ideas (like, "If you're looking for something to focus on today, try incorporating more adjectives" or something) along the way, in case you're struggling to come up with fun new stuff. This is going to be Facebook based (rather than blog posts) because it's still too painful to type a lot (my arm is on fire right now), and FB allows for it to be more interactive---I want to see your ideas and pictures and stories, too. At the end of the 21 days maybe I'll try to compile it into one giant blog post so that it will be easier to find.

*"frequently asked questions" = "questions that I just made up right now"