Whistle while you work*

I'm working on something . . .a little essay of sorts.  I've been rolling it around in my head for, oh, 6 months or so . . . that's about the time that it takes for me to plant an idea.  Starting jotting down my thoughts yesterday, so it should probably show up here in a month or so :)  Ok, probably sooner, but that's where my "blogging" time has been disappearing to . . . I haven't forgotten, I've just been laying a foundation.
Here are some random pictures from July: 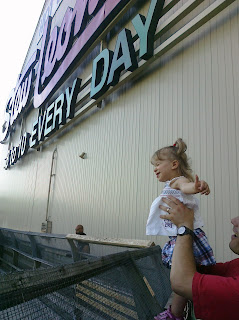 Maya loves Stew Leonard's.  We've been heading there since she was 2 weeks old (when she went in the Ergo, a la the pics at the bottom of this thread) and we call it "Uncle Stew's".  For those of you not in the tri-state area, it's a specialty store and they even have a little farm in the back (where this pic is).  Lots of samples, robotic animals----what's not to love? 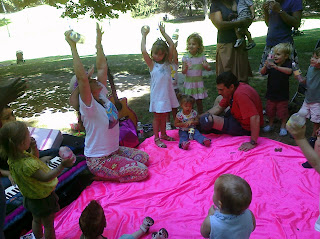 We stumble into good times wherever we go . . . here, we were walking in Central Park to kill some time before feeding therapy.  We saw some kids singing on a blanket and were watching from a distance when the leader of the party called "Hey, we're having a free music class, would you like to join us?"   Before I had time to think about it, Dave was halfway across the field to her.  Maya must think the world is a party :)
Posted by Dana at 7/14/2010 11:21:00 PM