Maya's turning into a little squirrel.

When we ride in the car, I often give her Cheerios in her cow cup to snack on.  I pass it back, with 15 or so Cheerios, she eats them, and then throws the cup on the floor and yells "eh! eh!" to get my attention when she's done and needs more.  (By the way, this started 2-3 weeks ago and words can not express how happy it makes me to be able to give her a snack that she can feed herself in the car!  Before this, we would have had to pull over somewhere so that I could feed her!  It only works with Cheerios, but we'll work our way onto other foods.)

So, I sit up front, chatting with her and glancing occasionally in the mirror.  She's never gagged on them, so I don't pay too much attention.   But the other day I heard a little "tick, tick" and caught a glimpse in the mirror of what looked like her dropping a Cheerio or two on the car door.


I thought it must have been a mistake.


It seems that she's creating an emergency stash of Cheerios in the car door compartment (ironically, she can't reach down to get them out once they've been dropped in, so I don't think she's thought this through all the way).

Upon further surveillance, she eats some Cheerios and then deposits a few in her little stash.  Here's the photographic evidence: 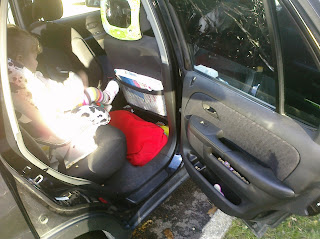 Maya in her carseat---notice the little hint of a Cheerios pile inside the car door? 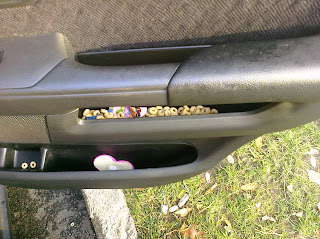 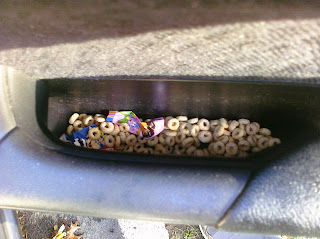 Dude, that's a LOT of Cheerios!  (And a crumpled Dora sticker from her most recent ENT visit)
﻿
In other news, I did a little guest speaker stint at a local college today which was so fun---more to come on that soon.  Also, Dave brought brownies home to celebrate the fact that Amsterdam International has now been shared over 600 times on Facebook!  :)
Posted by Dana at 11/05/2010 08:56:00 PM

the most important thing about this post is that dave brought home brownies!!!!!! :-) j/k that little maya keeps us laughing and on our toes

I remember the first time my son AJ fed himself -- it was also cheerios! We were at the mall and I'd thrown Cheerios on the tray of the stroller, something that had never worked before.....but this time when he thought no one was looking him, he slowly picked up one Cheerio and put it in his mouth.....then another....and we silently rejoiced, because we were afraid if he noticed us, he'd stop doing it! He was two weeks away from his 2nd birthday at the time. I'll never forget it.