Warning: The first three paragraphs here are kind of science nerd-y, but I tried to keep it short, sweet, & simple, and I think what I'm getting at here is really interesting from a psychology standpoint.

The Theory:
As you may or may not know, I was a zoology major in college.  I took a good number of ethology (animal behavior), behavioral neuroscience, & neuropsych classes . . . classes that looked at animal behavior and animal psychology (which, as it turns out, is very very closely related to human behavior and human psychology).

There is a very interesting model of animal (and human) behavior called "Learned Helplessness".  Basically, experimenters exposed dogs to a series of shocks.  "Group A" dogs could turn off the shocks by stepping on a bar, "Group B" dogs couldn't control the shocks.  Later on, the dogs were put in a new situation where they could all control the shocks by jumping over a little bar and getting away from them.  "Group A" dogs jumped away, but the "Group B" dogs just laid down and whimpered, taking the shocks.

Since the dogs in Group B had learned that their behavior didn't help their situation, they just gave up.  They  didn't assert themselves.  They were depressed.  (Human tests have found similar results.)

I've come to the realization this week that many bureaucratic systems (Early Intervention, filing claims with insurance companies, etc.) can set up the same sort of learned helplessness situation----by making people feel helpless, like they have no control over the outcome of their circumstances and no power to accomplish anything, many eventually become depressed and just give up.

The Personal Connection:
This past week, I was irate at dealing with the bureaucracy of the Early Intervention system.  I was take-my-plates-out-on-the-terrace-and-shatter-them-one-by-one-while-primal-screaming angry.  And, honestly, I'm still pretty ticked.  Here's the backstory:

I've been trying to get Maya leg splints for 10 weeks. TEN weeks. The girl can't stand. She can't walk. She needs splints.  Initially, I was worried to call too often to follow up on the paperwork because I didn't want to annoy anyone who would have the power to "lose" my file, causing a big delay.

Causing a big delay?---Ha!  Here we are nearly 3 months later, and I'm not afraid of getting on anyone's nerves anymore.  Now I'm trying to get on people's nerves like it's my freaking job.  I would be in the office, singing "99 Bottles of Beer on the Wall" if I thought it would help.

If you've been lucky enough to never deal with infuriating bureaucracy, here's my list of phone calls from Monday:

2:00: Called SC's cell phone (which she prefers to be reached on), left message

4:48: Called SC's supervisor again, he answers and says "Oh, SC is here, I think she has information for you" and transfers me.

She's like "Oh, I've been meaning to call you back". And then the big update is that she finally spoke to the person who has to sign off on our stuff and she said "Hopefully we'll get it by Friday, if not I'll call on Thursday to check on things."   Thursday.  Thursday?  If she calls Thursday, the signer person won't even get the message until Friday afternoon.  And no way they'll call her back on Friday.  So another week will go by with nothing.
AARRRRRRRRRRRRRRRRRGGGGGGGGGGGGGGGGGGGHHHH

I got the number to start calling myself, but in a ridiculous twist that unfolded this afternoon, it turns out that I've been leaving messages for the wrong person . . . I was given the number for the person who signs off on our speech papers, not our assistive technology papers.  So tomorrow I'll start calling the new number.

How can this be so hard.

My effingg kid can't walk. I need these splints. Sign the papers.

I totally understand why people lose their minds and shoot up offices.
(I'm not really threatening violence, please don't report me to any authorities :) )


In Conclusion
I'm a totally capable, savvy, intelligent woman---but dealing with this system has made me feel so useless and depressed that there are many days where I have thought "why bother calling. It won't matter anyway."

And if you're thinking "Oh, if it was me, I would just storm in there and demand this and blah blah blah" well, let me say, no you wouldn't.  You would quickly see that it won't get you anywhere, and actually, it would close doors in your face.

Plus---think for a moment about these calls I'm making.  I'm trying to get splints so that Maya can stand and walk.  Everyone who is in Early Intervention has kids with specials needs who are younger than 3.  So these people trying to make the calls?  We're pretty much near the end of our emotional rope a lot of the time.

We already feel helpless, because we couldn't control whatever circumstances have led to our child's disabilities.

We are already angry and frustrated, feeling like we try to help but things don't work.

We oscillate between "I will fight with everything I have until you give my kid what she deserves" to "I'm just so tired of fighting".

We oscillate between "I will jump and push levers and fight for my ability to not get shocked" to "Sometimes it's just easier to lay down and whimper and wait for it to pass".


Oddly, making this connection (my emotional roller coaster with this situation, and it's perfect fit with the learned helplessness model) has really let me detach a little bit from the process, thereby giving me the calmness to just keep calling, patiently and matter of factly.  For now anyway.  I'm sure I'll get frustrated again :)

So that's where I've been.  And now , here are some totally random pictures from the weekend, just for fun: 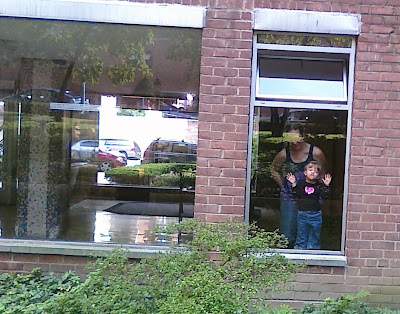 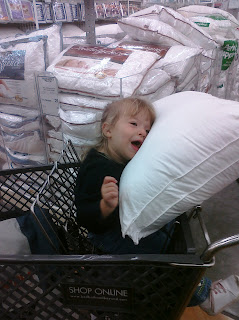 Shopping is so exhausting.   Sometimes I just need a break. 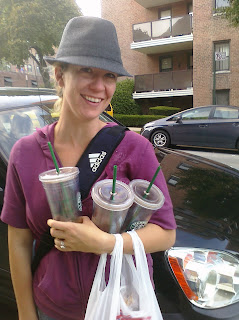 will write more later(because i realize this was a serious informative post), but just had to say----love the coffee pic of you at the end, love, love the hat!!!

I feel where you are coming from. It's so frustrating but once you have accomplished getting her the splints, it's one thing off your list. Keep fighting Mama!

I'm so sorry you're going through this. It sounds absolutely infuriating. I hope it starts working out for you guys sooner than later.

Frustrating for sure. But don't be afraid of your rights as a parent and the steps for filing complaints/due process if needed. Those are part of your rights because it's important and, unfortunately, necessary at times.