It's beginning to look a lot like Christmas. Or a strip club.*

In years past, we've set up a gate system to keep her (and last year, her & Parker) away from the tree.  That let us have the nice tree with nice ornaments and present underneath and everything.  This year we decided to just make the tree Maya-friendly so that she could get involved with it.  Our glass and ceramic ornaments have remained packed away.  Instead, we're using a box of cheap plastic ones from the drugstore and a bunch of homemade crafty ones. 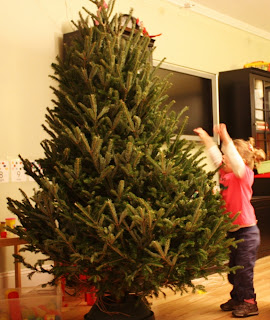 There's a huge tree in the living room!
She was a great decorating helper.  She would walk over to where I sat on the floor, adding (plastic) hooks to ornaments. I would give her an ornament and she would carry it over to Dave, who would then put it on the tree.  It was a great system, and Maya was delighted.  Until we were done.
After all of the ornaments were up Maya went into rearranging mode.  She takes an ornmanet off of the tree, looks at it, brings it to me or Dave, grabs our hand and leads us to the tree, and points at where she thinks the ornament should go.  We hang it up and walk away.
Repeat.

Forever.
Either she loves decorating the tree or she's got some OCD decorating tendencies. 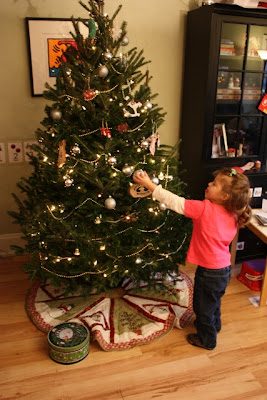 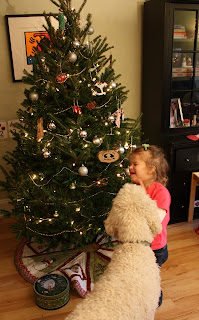 Parker, you can't help with this!  Silly doggie. 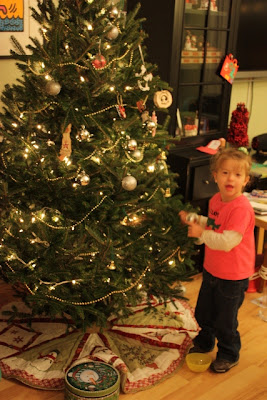 What?  This one needs adjusting, too.
Now that she's big enough to do some fun stuff, I've been trying to get crafty.  I printed out some coloring sheets (mostly alligators and snowmen---just google "alligator coloring printable" or whatver and stuff will pop up)---we're coloring and painting them, and we'll laminate to hang them on the tree.  Also, we made some cinnamon dough ornaments ("recipe" at the end of this post, if you're interested). 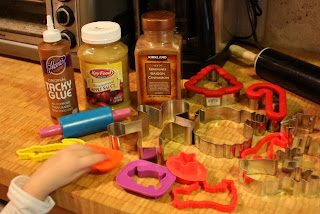 Trying to get a shot of the ingredients, but someone's anxious little fingers kept stealing supplies. 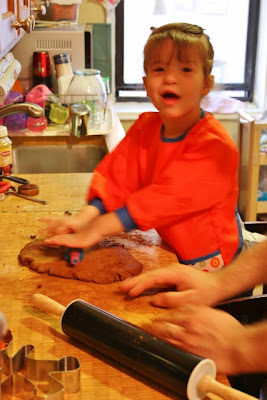 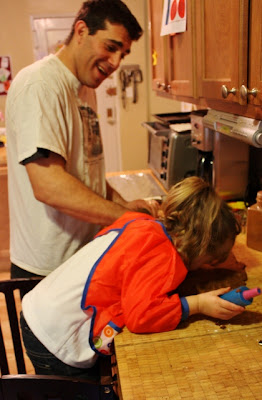 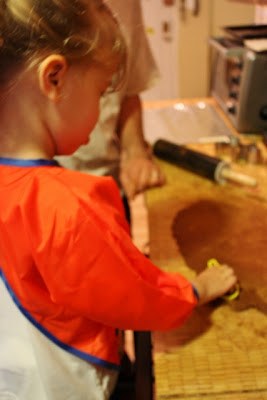 We used holiday cookie cutters and our play dough cutters---that's how we got the alligator and giraffe. 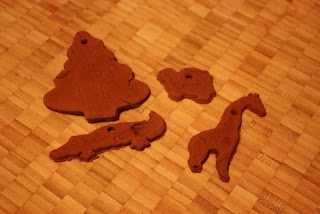 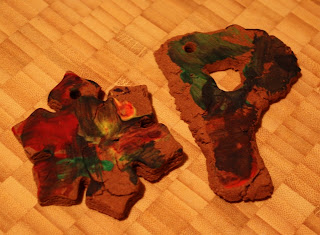 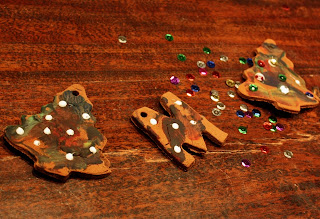 I thought adding sequins would be good OT practice.  Maya thought it was terribly boring and threw the packet of sequins.  Dave kept saying "Sequins?  Is that a word?  Do people really say the word 'sequins'?  That can't be a real word."  I rolled my eyes at both of them and just did it myself. 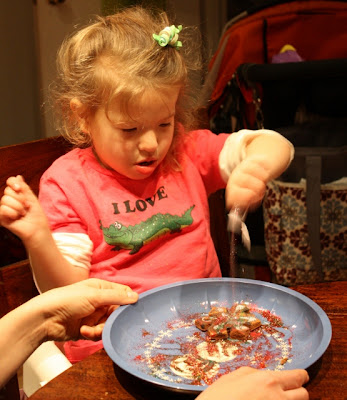 But she LOVED the glitter shakers! 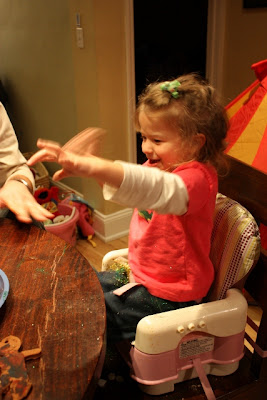 This is about where the glitter started to go everywhere.  We noticed that we were all covered in it--hair, face, table, floor, feet, clothes, everything.  And I thought "man, this is a rookie parenting mistake."  So if you see us 2 months from now and we're still shimmering, this is why.  Today I still had slitter in my eyebrows and keep finding it on my hands.  I feel like I need to wear a sign that says "My glitter is unintentional." 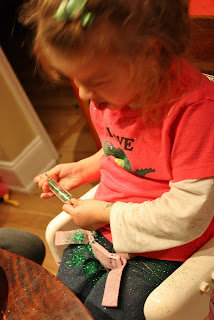 Then she spilled 2 tubes all over herself.  But in this picture she's trying to pick it off of her jeans and put it back in the tube.  I'll give you one guess at how effective that was. 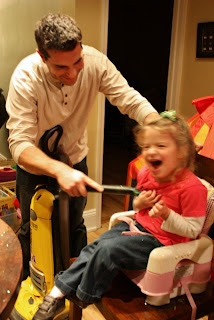 Dave decided that vacuuming her was the most efficient way to clean up.  She liked it :) 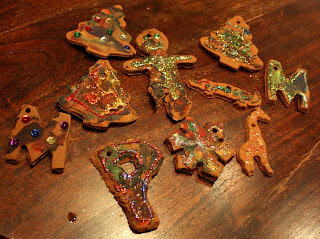 Finished products.  (We actually left some plain, some painted, and some all glittered up.)
Details:
Cinnamon dough recipe:  If you google "cinnamon dough ornaments" you'll find a bunch of recipes, and they're all different.  We used about 1 and 3/4 cups of cinnamon, 1 cup of applesauce, and a good squeeze of glue (maybe 1.5 tbl).  The dough was too sticky, so I just kept adding flour until it got less sticky and more doughy.  You'll need extra cinnamon for coating the countertops and rolling pin.

Ornament prep:  After you cut out whatever ornaments you like, stick them in the oven (we did a foil lined cookie sheet) on 200.  I flipped them every 45 mins or so, and probably left them in there for 3 hours.  Alternately, you can just leave them on a drying rack on the counter overnight.  Either way, your kitchen will smell like baked goods and make you hungry.

Decorating:  We used plain old tempera paints and a paintbrush, because we had it.  I liked the sequins but Maya didn't.  If you have a 3 year old, I would say to avoid glitter, but really, I'm kidding myself, because it was really fun and I think we'll be using it again this week.  But if you are really type A, avoiding the glitter is a good idea.  You will be glittery for a while.

*Just to be clear, in case you've reached the end and are still confused, the strip club comment is because of the glitter all over the floor, counters, and people in my apartment.  There's nothing else strip clubby going on here.
Posted by Dana at 12/09/2011 07:37:00 PM

Loved this! It looks like Maya really enjoyed herself!

Glitter is the herpes of craft supplies.

awesome. billy has been working with gingerbread dough at school + always comes home smelling like a giant cookie!

Maya is so cute I don't think it is OCD decerating I think she was just having fun!