It's got me thinking (more) about all of the bureaucratic nonsense that parents of children of special needs end up dealing with.  Yeah, I know that many people without kids with SN have insurance wars, and many people deal with other bureaucracies . . .but it can become (literally) a full time job for parents of children with special needs.  And, referring back to the learned helplessness model that I'm such a fan of, it's hard to keep trying to fight the shocks.  Last night when Dave got home I took a long, hot shower and had cookies and wine for dinner, because I was ready to just give up.  (Thanks to the KIPP cookie exchangers for providing my dinner ;)  )

If you are lucky enough to not understand what it means when someone says that they're "fighting with the insurance company", or if you don't understand why it would be stressful to just make a few phone calls, I hope that the saga below will help to shed some light: 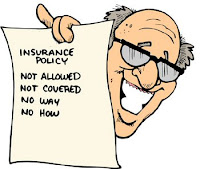 Background:
Maya gets a lot of therapy, most of which is through the state's Early Intervention program.  However, we also supplement with private speech & feeding therapy, which we pay for out of pocket.  Insurance reimburses us for about 1/3 of what we shell out (don't get me started on the additional expenses of having a child with special needs).  Once we have a statement (EOB) from the insurance explaining what they will or won't pay, we can take money out of our FSA (a special account that we pay into at the start of each year, tax free, and can use only for medical expenses).  Without those EOBs, our money is stuck in the account.  If we don't submit EOBs to use it, we lose it.

The Saga:
I submitted a bunch (60ish) claims back at the end of Sept. Some were processed, some just seemed to disappear (meaning that I never heard anything about them, whether they were approved or denied). I've now spoken to different representatives about these claims a bunch of times---each time "something" is wrong with them, preventing them from being processed at all.

Call #1 : The first time I called, they "didn't have the provider's name and address"---but when I spoke to a representative and explained that all of that information was on the receipts that I sent in she was then (miraculously) able to see it. She then submitted them for re-processing.

My thoughts: Hooray!  That was easy to fix.  Now I'll just wait a few weeks for checks to come in the mail.

Call #2: The second time that I called they said that the person who resubmitted them the first time did it incorrectly, so we had to re-do everything from the first call.

My thoughts: Argh!  It's annoying that I waited all this time thinkng that it was being processed!  Oh well, at least now it seems like everything is fixed, and I just need to wait a few weeks for checks to arrive.

Call #3: The third time they said that the problem wasn't the missing address information, it was that they felt like the therapist wasn't qualified to provide feeding therapy (because her letterhead says "speech pathologist"). I pointed them towards 2 other claims that I had submitted and they had paid. She agreed that it didn't make sense, and put them all through for re-submission, again. She said that she would mail me EOBs that said the claims were denied, so that I could submit them to the FSA.  This phone call took 47 minutes, as we had to individually identify each date of service and claim (it's a good thing I've learned to keep good records).

My thoughts: What the hell-o goes on at these places?  How is it even possble that there are so many issues with these claims?  I'm starting to suspect that things are done incorrectly intentionally so that eventually I will give up.  Or be committed to a mental institution.  It's a good thing this girl was so helpful, she'll at least get those EOBs out to us tomorrow so that we don't lose our FSA money.  If I don't get them in the mail in the next few days I'm going to call and check.


Call #4: The fourth time I called, the person said that we couldn't get EOBs in the mail because our account was now paperless (I'm 100% sure that this is another stalling tactic.  We never changed our account to paperless.  I have statements that were mailed to me in Oct, but in Nov they started posting notices to our "online insurance account"--which I had never even heard of prior to this call.  WHAT THE HELL? ).   She also said that they would never agree to mail 36 EOBs without something in writing. When I offered to fax in something she said that wouldn't work.  Then I had a crying, cursing mental breakdown on the phone and got the supervisor :) I faxed over 50 pages (that I had previously mailed in) to the supervisor. She said that she would try to figure out some way to help.


Call #5/6/7: The 5th-6th-7th times I called, the supervisor dodged my calls.
My thoughts: Shocker.  I think they may be starting to realize that I've crossed the line from "Overwhelmed victim of this company" to "Angry and annoying client who won't. ever. stop."

Call #8: The 8th time that I called, the supervisor saw that all of the claims are in the limbo of resubmission (for the umpteenth time). She emailed the manager to see if there was a way to print EOBs for the ones that have been denied and send them to me.  I still don't think that this will help with th 36 claims that are in limbo.

My thoughts:  I'm coming to the realization that the "supervisor" does not seem to be much more capable of getting things done then the call answering folks.  But at least now I have a name, and I get to the same person each time.

Call #10 (today): Supervisor said that her manager emailed her back, but it was a secure, encrypted emal so she couldn't open it.  So she emailed the manager back and asked her to re-email it but not in a secure encrypted way so that she would be able to open it.

My thoughts: Ok, now you're just making shite up.  There's not even a remote possibility that any of that is legit.

So, there you have it. In my humble opinion, the insurance company is deliberately giving me the run around, trying to wait me out.

And every time that I get out my notes and stack of papers to call, I think of one of my old favorite quotes (which you may have seen on the FB page):

"Courage does not always roar.  Sometimes it is the quiet voice at the end of the day saying 'I will try again tomorrow'.- Mary Anne Radmacher

And I guess that's what I'll do.

I am sorry that dealing with insurance is so trying for you...however, if they ever question the qualifications of your SLP again, you can point them to the scope of practice for the profession from our national accrediting organization - ASHA - as long as the SLP is ASHA certified, feeding therapy is totally and completely within the scope of practice. There are a lot of things we can do and it ticks me off when the say stuff like that. I am so sorry that you have to deal with all this extra crap while trying to do the best for your beautiful daughter. Hang in there Dana!

You have a lot of courage, just keep looking at Maya, you are doing a great job.

Oh Dana! I'm so sorry you are going through this. Insurance companies suck so so badly.

I stopped fighting it because it evened out for me in the end, but it's so freaking frustrating!

Oh how I do understand. I also have trouble with the FSA, in a very similar way! Oh, and half of the battle with us "special parents" is persistence and patience. Most people give up. I'm not one of those either. :)

That is so absolutely ridiculous. It is so hard for me to believe that the way you are being treated is legal (as the wife of a lawyer). I hate, hate, hate that you have to continue to waste time that could be so much more productive! So sorry.

OMGosh... I think all of us "warrior" moms are shaking our heads in agreement. Yep... been there done that. Isn't that sad that I know exactly what you are talking about? Grrrr... I feel so frustrated for you / for us. There should be a better process. Way to stay on them though. I swear that is the only way to get it done. Now pass the cookies. :)

seriously, it's an awful process. and it's unbelievable the amount of time and effort that you have to put in to get what is rightfully yours.

Dana-
It is very common for insurance companies to deny claims for the simple reaon that they dont wanna pay. Other companies do it too-- my co-worker had a special needs son- who was repeatedy denied for the NJ transit access-a -ride although he was pretty much wheelchair bound 90% of the time-- go figure!

Now, what I would do is call one of those consumer watchdog groups and have them contact the company-- shit-- call the newsmedia and expose their asses while holding up a pic of your adorable daughter and see how quickly you get your checks!!!!!

I'm so sorry! I feel for you. My hooohaaa started today. Mango is on medicaid, and since I'm a single parent, and stay with him 24/7 to provide care for my disabled child, the state has decided to send me to 'job orientation training' in two days - because he's not on a respirator and doesn't have a 'G' button (which apparently?) would automatically exempt us. Trying to get this straightened out with all the different branches of gov. offices and all our doctors, has me flirting with a migraine.

dad
listen to tina! you know how many times I have commented on items. Go to the press. Let them know! put there dirty diapers in their faces. keep on keeping on. You can and will make a difference for all the others who don't have the time to fight.

I called once a week, sometimes once a day, for 6 months to get my son's occupational therapy approved. In NJ all therapies are approved for children who are autistic. My son has a genetic syndrome, is autistic, and has intellectual delays. I had to call once a week for an entire year to get his genetic testing approved. I hate insurances with a passion!