I don't have 7,682 posts lined up--but as I watch Maya and Will interact with their talkers, I stop to note how remarkable it is, in the truest sense of that word. Several people have asked me about their interaction, both in general (curious about what sibling play and interaction looks like, when language is so limited) and related to the talkers (curious about whether they sit and communicate through the talkers).

In general, they play and bicker and tease and celebrate, just like any siblings. Will's verbal language is just now at the tipping point that I've anticipated . . . the point where he begins to surpass her with speech. They both are mimicking a startling amount, but his imitation of my words and phrases are more clearly articulated than hers (although hers are hugely noteworthy, since prior to now she wouldn't really try much in the way of spontaneous imitation). Sometimes they play quietly, sometimes they boss each other around ("Right here, Will!" "No, Mema!"), and sometimes they argue loudly. The arguing is a combination of "No!" and yelling strings of nonsense at each other (which is somewhat hilarious). They have at least one word that is meaningful only to them ("dah-tah") and despite multiple attempts at asking each of them what it means, I'm left clueless. Maya always shakes her finger at him when she says it, and they both use it when someone is getting in trouble, or when one person is aggravated and the other is teasing, or when there is amused fighting. They also understand each other kind of effortlessly, and when I can't figure out what someone is saying, and the speaker can't translate him/herself with a talker, I ask the sibling "Do you know what s/he is saying?" 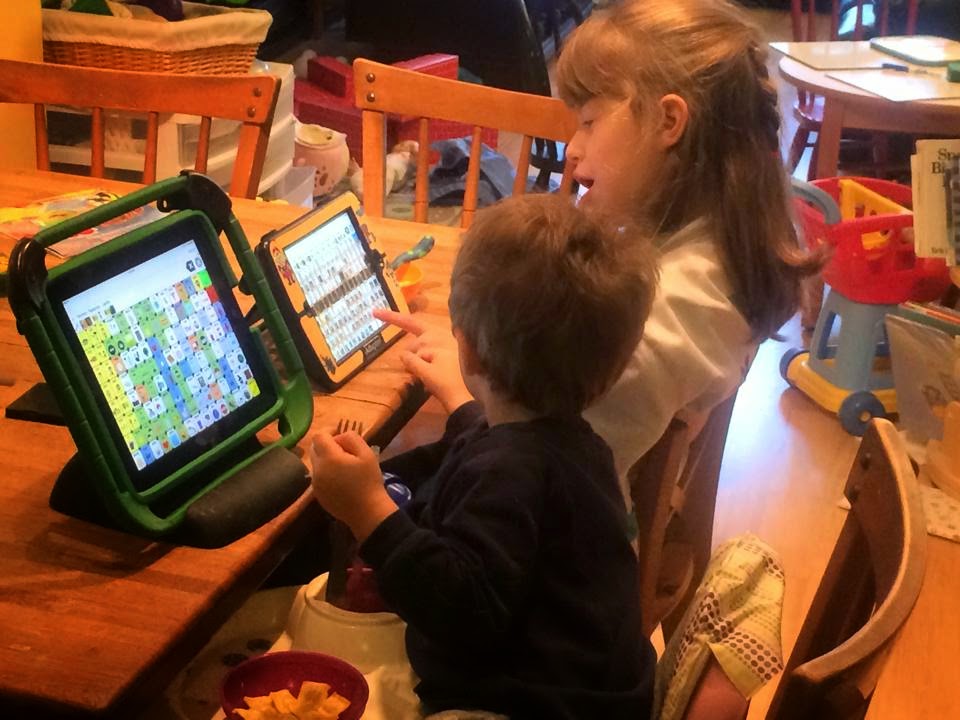 Their talker-related interaction has just started to evolve recently. Up until this point they would each use a talker independently, and if one of them was using a talker the other would certainly take note and become an active listener, but that was about it. So, if Maya had Mini at the table and started to say something, Will would try to lean over or pull Mini sideways so that he could watch what she was saying. Sometimes the listened would then try to take a turn on the talker (Will reaching over to say something with Mini after Maya was done) but this was often met with resistance from the speaker ("No!" and pulling the talker back). This type of exchange went both ways.

Recently, there's been a shift. It started one night when I set them both up next to each other at dinner, with talkers on the table. Maya said something . . . and Will quickly copied it. This happened a few times, then they switched---Will said something and Maya copied it. This game continued for the duration of dinner. Hours later, when the kids were playing in the living room, I heard Will say some of the words that Maya had showed him at dinner. He's an impressively fast AAC learner.

This video was taken last night. The kids are eating (and Will is protesting the appearance of the camera). Maya has decided to experiment with/practice using the search feature, and while I'm not sure if her first search was deliberate, there is no doubt that the following one was. (She types in a letter and it pulls up a list of words, which she scrolls through to find her target.) Will and Maya take turns prompting each other, when they appear unsure that the sibling can find what they're looking for, or maybe when they think the other is taking too long?

It feels noteworthy, this type of exchange. Their joint attention is pretty cool, as is their patience and prompting and turn-taking in this little game. They've moved from experimenting next to each other with talkers to experimenting together, certainly. I imagine the last step will be actually talking to/with each other through the devices, using them conversationally. I'm kind of on the edge of my seat to see that unfold.

I also love Maya's respect of Will. When he pushes her hand away because he wants to do it himself, she lets him

Now that is REALLY cool!