Over the past week I've gotten a few inquires about Maya's iPad case, so I thought it would be best to do a review here.  (As usual, I am not affiliated with this company.  They don't even know that I exist.) 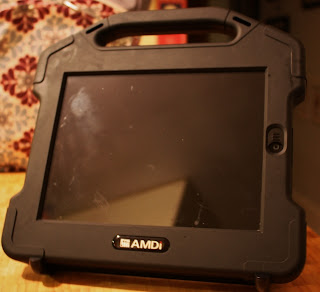 Maya's iPad is in a case by AMDi called the iAdapter. (She uses an iPad1, and therefore the original iAdapter. They make an iAdapter2 for the iPad2.)  It is a hard black rubberized case that I assembled with a screwdriver (you don't just pop the iPad in and out, once it's in there it pretty much stays in there).  You can find the full product information and specifications about the iAdapter here.

The Pros
We bought this case for a few key reasons: 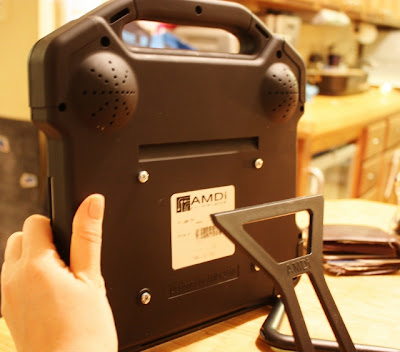 1. External speakers: We anticipated that the iPad would be serving as Maya's voice . . . and she deserves to be LOUD!!! From my (extrememly non-technical) perspective, the iPad speakers just aren't all that.  If Maya is in a noisy classroom, restaurant, or grocery store (like we were today) and she says something with the iPad, I want to hear it, loud and clear.  These speakers are no joke.  They have 3 settings (as seen in the middle of the pic below)--HI, LO and OFF. 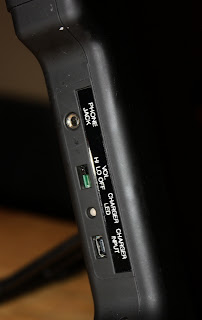 2. Button cover:   Maya learned very quickly to push the button on the iPad--to turn it off, to exit an app, to pull up the keyboard.  Since there's only one button on the entire thing (and most kids are a fan of pushing buttons) she would just push-push-push-push and drive me crazy.  I had to hold my thumb over the button when we were using the iPad, which was irritating. 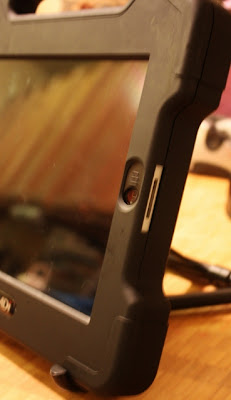 This case addresses that issue with a small plastic sliding piece that can cover the button.  It's challenging enough to move that Maya can't do it. Very helpful.

3. Durability/carry-ability: This is a tough case.  Toddler tough.  I love the carrying handle (although Maya generally picks it up with two hands on the sides) and the fact that it just feels durable.  I don't worry about it falling off the couch (hey, it happens) or getting too banged up in her backpack.

4. The stand: The stand comes with the case and props the iPad up at a great angle.  It's sturdy and doesn't tip or get pushed over.  A long groove in the back of the case lets the stand kind of lock in.  (You can see it in the pic above.)

The Cons
These are the issues that I have with the case.  (Remember, though, I'm not a techie type of gal.  It's possible that I'll list my grievances and someone will reply "Hey, you're kind of an idiot and just don't know how to use the case" . . . if that happens, I'll come back and edit my list.)

2. I initially had issues with charging the iPad. Weirdly, when I screwed the case together tightly the fit was so snug that I couldn't get the iPad charger cord all the way in.  I had to loosen two of the screws slightly.  That's annoying because I would like to feel that the case is super secure fitting. *post modified: I was wrong about this.  At a reader's urging, I retightened the screws, and sure enough, the charger fits in---it does take a bit of wiggling, though.  I guess I was being too gentle when I tried to insert it before.  Anyway, I take this one back!

*post modified 1/30/12: I orginally had "#3-I can't turn the screen off" here.  But, sure enough, someone with the same case wrote on my Facebook wall that there is indeed a (very tiny) awake/asleep button.  Big enough for me to use, but too small for Maya to find.  Very clever!

5. It's expensive.  But considering that it's a hard core case with great speakers and unique features, it seems fairly priced.  (It's also wheelchair mountable)


The bottom line
I liked the ruggedness of the Otterbox Defender slightly better, but we eagerly moved to the iAdapter for the reasons listed above.  The speakers in particular are a huge bonus.  While the cons are irritating, they are definitely outweighed by the pros (for us, anyway).

*You can see Maya using her iPad, in the iAdapter case, in many videos on the blog.  This post has 2 videos, and each one shows the iPad (and case) from a different angle: http://niederfamily.blogspot.com/2012/01/progress-report-on-communicating-with.html
Posted by Dana at 1/29/2012 08:34:00 PM

Fantastic, thanks for sharing!

I know that iAdapter case is very useful to any iPads because it can protect it and could avoid scratches or anything but I find it so bulky.

It's a personal pet peeve of mine when someone leaves an anonymous short negative reply on a review. It comes off looking like you work for a competitor's product.

The weight and size are not negatives to me, because we are using the iPad as an AAC device. Even with the case it's significantly less bulky and heavy than a dynavox.

And with a toddler I have no real reason to ever want to remove it from the case! Maya could destroy an unprotected iPad in about 5 seconds, I think.

Dana - once again, I love using your blog as complete reference. Putting in an application to get Jack and ipad - I knew exactly where to go to figure out which case.

unfortunately, I cannot get the app you love ;(

We purchased the iAdaptaer and are not happy for a couple of reasons,
1)the speakers run out of power and then there is no sound and if we need sound back right away we either plug into computer or have to unscrew 7 (or 9?) screws to get the iPad out.
2)no microphone--so far we have not been able to get the microphone to record anything while incased in the iAdapter, not even noises like tapping the case with our fingernails. It is completely disabled somehow so forget about facetime.

The iAdapter would be a more usable product if it was a clip together case so the iPad could be removed if needed. And I'm still hoping there is something we are missing in regards to the microphone because that is just stupid, currently waiting for a reply from the company

microphone works just fine with the iAdapter case on, after going through all settings and tech support etc with no solution we turned the iPad off and back on again -- everything worked normally after that. Have no idea what caused it.

That is a really great case you have for your ipad. It is really high quality and probably has really great protection. I would love to get a case like that for my ipad.
Jak Manson | http://www.zoogue.com/

You can get clear THIN plastic sheets to place on the screen. It is NOT as durable or awesome as the otter box but it's quite a decent cheap alternative. I think is a few dollars each.

Thank you for sharing information with us! There are lots of different covers out there, but we’re confident this is the best iPad mini case for kids available. Our Little Monkey iPad Mini Cover will protect and serve no matter how heavy handed your little monkey can be child iPad case.