What's in a name?

I used to think, not much.  But after a Special Needs School Fair last night, and a frustrating genetics appointment this morning, I'm finding that I'm starting to feel like a name is more important than I initially thought.  I'm speaking, of course, of a name for the source of Maya's delays.  A diagnosis.

Last night the school fair was bustling, overwhelming---a million booths, representing all of the schools that can accomodate students with different needs from preschools to high schools.   Dave entertained Maya (they came to make it more of a family trip and less of something-I-was-afraid-of) while I scoured the map of the event, cross referencing different needs each school could accomodate and the neighborhoods they were located in.  And then I went to booths and waited for my turn to talk to the representatives from the schools I was interested in.

And while I waited I heard snippets of conversations around me "My son has cerebral palsy and uses a wheelchair" "My daughter is deaf but uses signs", etc.  But when it was my turn, I didn't have the right words to use.  I hadn't thought far enough ahead, and when they asked about my child's special needs, all that I had were "can't's".

And everytime I said it, I felt worse and worse.  Who wants to be defined by their "can'ts"?

I wouldn't want to walk into a group of new people, shake hands and say "Hi, I can't run, can't jog, can't do push ups, can't write without starting every other sentence with "and", and can't do mental math if the problem involves a lot of 7's.  Oh, and my name is Dana."

I used to think that a diagnosis wouldn't matter, because it wouldn't change who Maya is, and it wouldn't change our plan of action (re: therapies).  But now it would be kind of nice---nice to be able to say "She has Abc Syndrome" and then move on.  As we get ready to transition out of the Early Intervention program and into the CPSE (preschool) system, a diagnosis would make arguing for services easier, applying for programs easier, and it would help us maybe find other families who are in the same place that we are.

At our genetics appointment this morning, another test came back negative.  The geneticist is leaning towards one diagnosis (which can't be tested for), I don't think it's a good fit and I'm leaning another way (also difficult to test for).  We may both be wrong, who knows.  More bloodwork was ordered, results to come back in a few months.

Until then, Maya remains the same animal-loving, silly girl.  She spotted this goat in a store window (yes, a real stuffed goat . . .only on Madison Avenue) and shrieked and pointed until I wheeled her over: 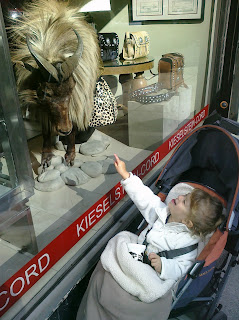 (You should've seen the tears as we wheeled away.  She's screaming hysterically, passersby are giving me looks, and I'm saying "It wasn't even a real goat!" over and over)

She really wants to be vertical all of a sudden, and is trying like crazy to get around (here, marching through the hospital hallway this morning with Dad) 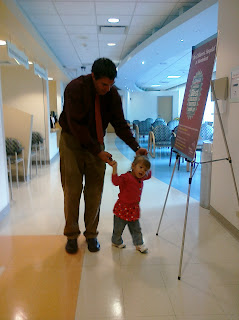 And while her form is lacking, she's getting quick with the stroller----and SHE CAN STEER NOW!!!!!!!!!!  This is huge . . . it means that she can decide where she wants to go and actually make that happen :)
Notice the proud-as-can-be smile at 0:08, and the steering work at 0:20
As always, if you see a blank square with a play button, click play and the video will appear . . .

that is a fabulous video and i actually laughed out loud at the 'it's not even a real goat.'

as for the name, i hope you get one soon. it will make certain things a lot easier. maybe someone who reads amsterdam international and gets linked back to the blog will be some amazing geneticist who knows what tests to run and will 'rush' all the results!

Loved the video!!! She has such determination!

I know it must be hard not having a name for what she has- hopefully when you do find the name for it- it brings you comfort!

There's a wonderful story in "The Devil's Storybook" by Natalie Babbitt called "The Power of Speech" about the Devil and a really annoying goat named Walpurgis. It's a story I tell, so I can vouch for the last line (after the goat has been turned into a stuffed goat by a frustrated Devil: "And since the sign was still there, and still said 'This is a real goat,' nobody ever knew the difference. And everyone, except Walpurgis,was satisfied."

Go Maya! She reminds me of Taylor at that age, learning how to walk with her little forward walker. I know all too well the frustrations of waiting for a diagnosis. It's one of those, 'it really doesn't change anything, but it somehow changes everything' scenarios when you do finally get one. I got so sick and tired of saying "We don't know" every time we were asked what her diagnosis was. Now when I rattle off her diagnosis (it's a mouthful), people still stare at me with that blank look... Sometimes it was easier just saying "don't know," haha. ;)

Dana, remember - those parents chose to point out their children's can't. Doesn't mean you have to do the same.

Maya is a wonderfully sweet girl who loves animals, has a smile that lights up the world. She can walk with the assistance of this little stroller she pushes and has even been able to turn corners with it. She lets her needs be known by (insert), etc.

It's all in how you frame it. I hear what you are saying about getting a diagnosis though. I can't imagine how frustrating that is for you.

I could have written this post myself -- I totally relate to the "envy" of parents who can explain their experience with two words.

After a third round of genetic testing showed us nothing, we are saying that Joe has "Joe syndrome." I wonder how many people go home to Google it!

I can totally relate to your post. I remember when Grace was aging out of EI and we were looking to place her in a school. It would get so depressing having to go over and over all of the things that she couldn't do and not having a name to explain why she couldn't do all these things. I still long for a diagnosis, but have come to believe we may not get one. So I now say my daughter has "global developmental delays and intellectual disabilities" and leave it at that.

i'm an EI PT and i frequently see a sudden jump in mobility when kids get their suresteps. they are GREAT for low-tone kids! glad she is up and about. :)--liz the PT

My daughter Michelle has "Michelle syndrome". She just turned 13. I cycle every two years trying to find a diagnosis, see a new geneticist, google all of her "cants" like a crazy woman, find out nothing new and give it up for a while longer. It'll rear it's head again soon enough. I do hope you get your name, I'd still love to have one, but it's okay on this side too. You just have to bond with those parents of kids with no named syndromes :)

Thanks for the comments, everyone.

Foxxy, you're right . . . it's all in the framing. Everytime we enter a new situation it takes me a little while to find my footing . . . I haven't really had to explain Maya's cans & can'ts very often until now. I'll find a good way to do it.

Liz, it's interesting trying to figure out what roll the SureSteps are playing here . . . she was starting to walk around more the week before we got them, so I can't say that it's all the splints. At the same time, she LOVES them! She wants me to put them on as soon as she wakes up. So they are definitely helping her to feel more stable.

Wow, such an awesome blog you have written there and you and I get exactly what information I am looking for, in the third paragraph you put amazing effort to explain the theme of the content. As a content writer, I can understand efforts because when students ask me for bsbpmg511, I do the same.