The Ghost of Playgrounds Past

The winter is ending, and the advent of spring has released dozens of toddler-and-caretaker pairs from their apartments and out to the playgrounds in our neighborhood. Will and I are one such duo, eager to get outside and play after a few dreary months spent indoors. Last year he was too small to really do much at the playground, and I had been looking forward to this season with him---big enough to run, steady enough to slide, mornings filled with fresh air and sunshine.

I knew that at the playground, I would be a first time mom again. Even now, Maya lacks the agility and balance, the self-protective reflexes and coordination, to explore freely at a playground.  I knew that Will’s playground abilities would develop rapidly, that his coordination and capabilities would be surprising. I knew it would be different, and I looked forward to that difference.

The playground was a loaded place for me and toddler Maya. It was bittersweet to the fullest possible extent of that word. The sweetness of doing something “normal”—not at the doctor, not at a therapy appointment, not doing exercises or assessments, just a mom and her little girl at the playground. But the bitterness (oh, the bitterness) of being different- leaving the safe bubble of home behind and seeing what other two year olds could do, could say, could eat, could . . . everything. They could everything. We sat on the equipment and watched kids race around us. She crawled, then walked with a walker, then walked with my catching hands nearby, and I was a focused assistant. She needed me so much. Will is already independent, running away, bidding me to watch and follow but shunning my help. So I watch and chase and play and smile and feel like I’m getting off so, so easy.

I didn’t anticipate that returning to the playground with a new toddler would trigger a visceral response---that type of physical memory that gets stored somewhere so deep that it’s beyond thought and ingrained on some sort of deeper, fundamental level. The way that revisiting the empty halls of your high school as an adult calls forward anxiety or wistfulness or nausea, or driving down the street that you grew up on kicks up the emotions of childhood. It’s not remembering, it’s re-feeling.

The moment I open the gate to the playground and push the stroller in the re-feelings start to rise, a familiar swirly tide of anxiety, determination, self-awareness, pride, sadness, protectiveness, bitterness, all pulling at my ankles. And then I look down at Will in the stroller, already trying to free himself from the straps and yelling “Uppy! Uppy! Uppy!” and I remember that I don’t need any of those feelings this morning. My feet are solidly on dry land, but the phantom tide feels strong enough to bring me to my knees.

I watch him climb and run. I wonder what the balance is between promoting independence and being neglectful, since Maya always needed me at her side, less than an arm’s length away. I side-eye the other parents, gauging the appropriate hovering distance.

I talk about typical kid things with typical kid parents. I’m an impostor, surely they can see that I don’t fit in.

I am amazed by his abilities, the way he moves and interacts. I narrowly resist the urge to look around and call to the other parents “Did you see that?! He did the slide like it was nothing! And look at your kid, climbing the stairs without your help! This is amazing! Are you soaking it in? Are you noticing? Are you waiting for the other shoe to drop?”

Because doesn’t this feel too good to last? Too easy?

Is this really how life is for most parents?

Do you people know how easy this is?

How lucky you are?

I mean, how lucky we are.

Where is the self-consciousness of having a toddler who doesn’t toddle? It’s over there by the swings, I think, where we would swing and swing and then sit in the shady patch with chalk and then . . . well, I guess we’ll just swing again. Where is the anxiety over rushing home and making it to the next therapy appointment? It’s right here, in the perpetual checking of my watch, in the way that I keep stopping myself from saying “2 more minutes” when I remember that really, we have the whole morning. Where is the awkwardness of avoiding small talk with other parents, talk of ages and milestones, favorite toys and favorite games, all seeming other-worldly? It’s there, by the park benches, where I used to feed her jars of baby food and try, so hard, not to overhear the conversations of the other caregivers. And it’s here, in the way that, without thinking, I avoid eye contact so as to not accidentally stumble into a conversation. Where is the angst, the sadness or frustration or this-isn’t-fair-ness that I would push down but remember later, in the dark, when I couldn’t fall asleep and couldn’t block it out any longer? It’s here, right here.

And I don’t know what to do with it.

Oddly, it hurts more now than it did then. Back then I was sincerely happy to take Maya out to the playground, and I was good at focusing on the positives and enjoying our time together. But now I see what it is like to be the mom I would have been, and I’m realizing that the playground experience that I had a few years ago was a shadow of the experience that I’m having now. And it hurts. I have pity for my mom-of-toddler-Maya self, and I have hatred for having self-pity. I have sadness that our experiences together were more difficult, more lonely, more stressful than my time with Will is going to be, and I have guilt over that sadness. I have happiness that I get to be the mom that I would have been, and I have sadness that Maya doesn’t get a re-do, that her one shot through those years is done, that she had her toddlerhood and it will be very different than her brother’s.

I thought this restart would be refreshing. It would be a chance to do motherhood in the normal way, to blend in, to not be set apart. But now, given the opportunity to blend, it feels like fraud. I find myself wishing that I had battle scars, visible and raw, something that would let people know that the my parenting path has not been theirs, it’s been thorny and rocky. A scar that is jagged, and fresh, but only occasionally slightly visible, peeking out from the neckline of my shirt when I move in certain ways. A scar that makes my outside match my inside, that relieves the feelings of fraud by giving a heads-up to the other playground patrons that though I am here having fun, not talking about my scar, I am nursing a wound. That I am sore, that it’s still a little raw, and that I’ve gone through something.

I’m going through something.

This is going to be painful, this business of reliving motherhood.

But I think that it’s also going to heal me, in some small dark places that I didn’t realize were in need of healing. 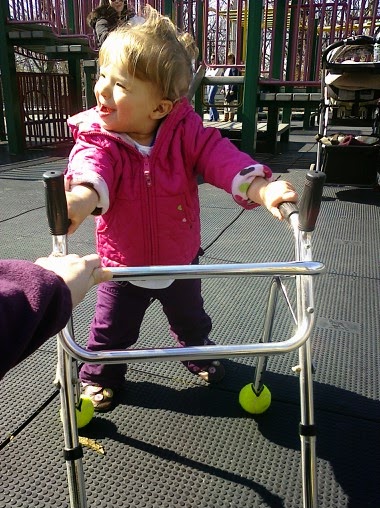 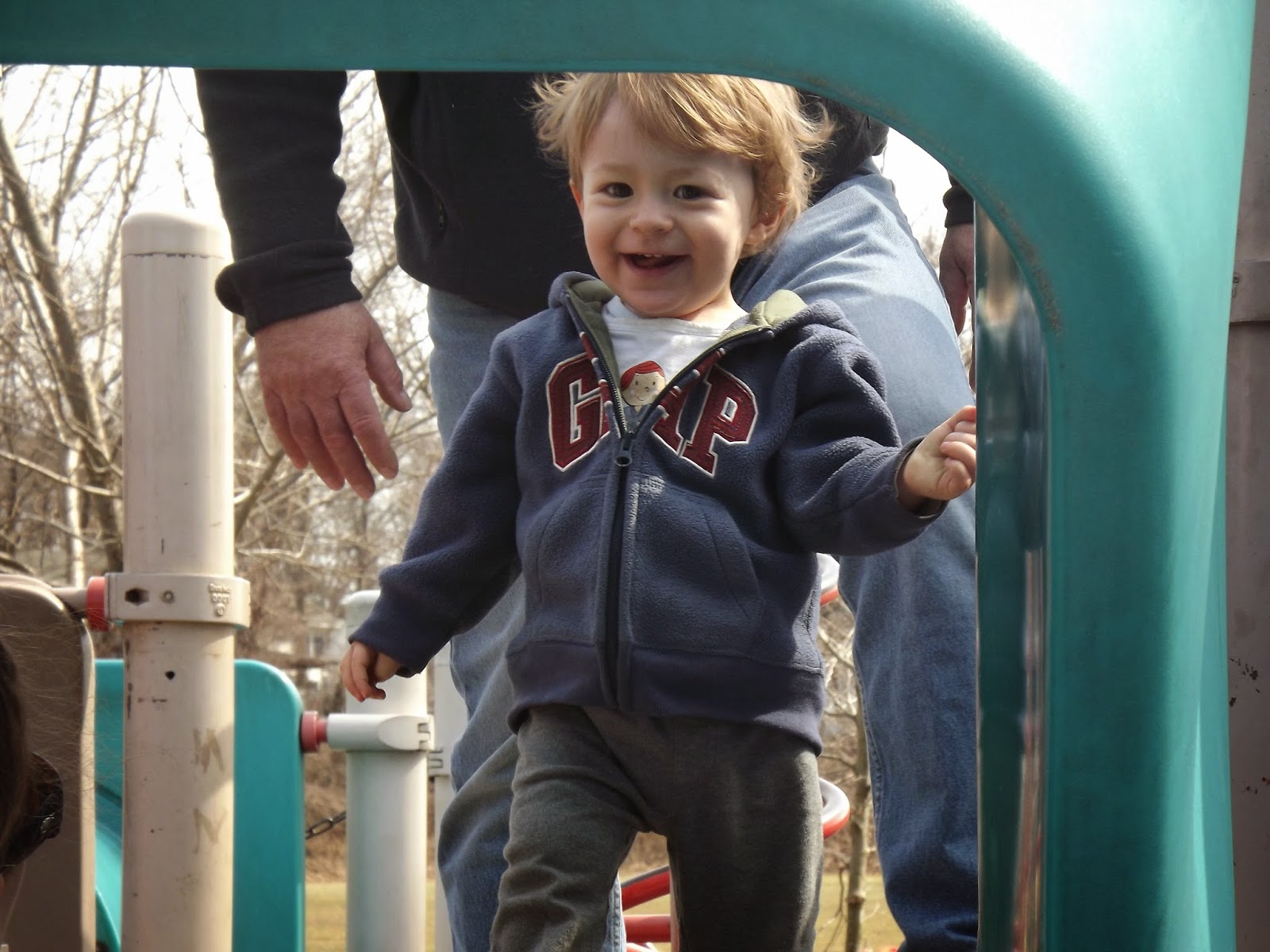 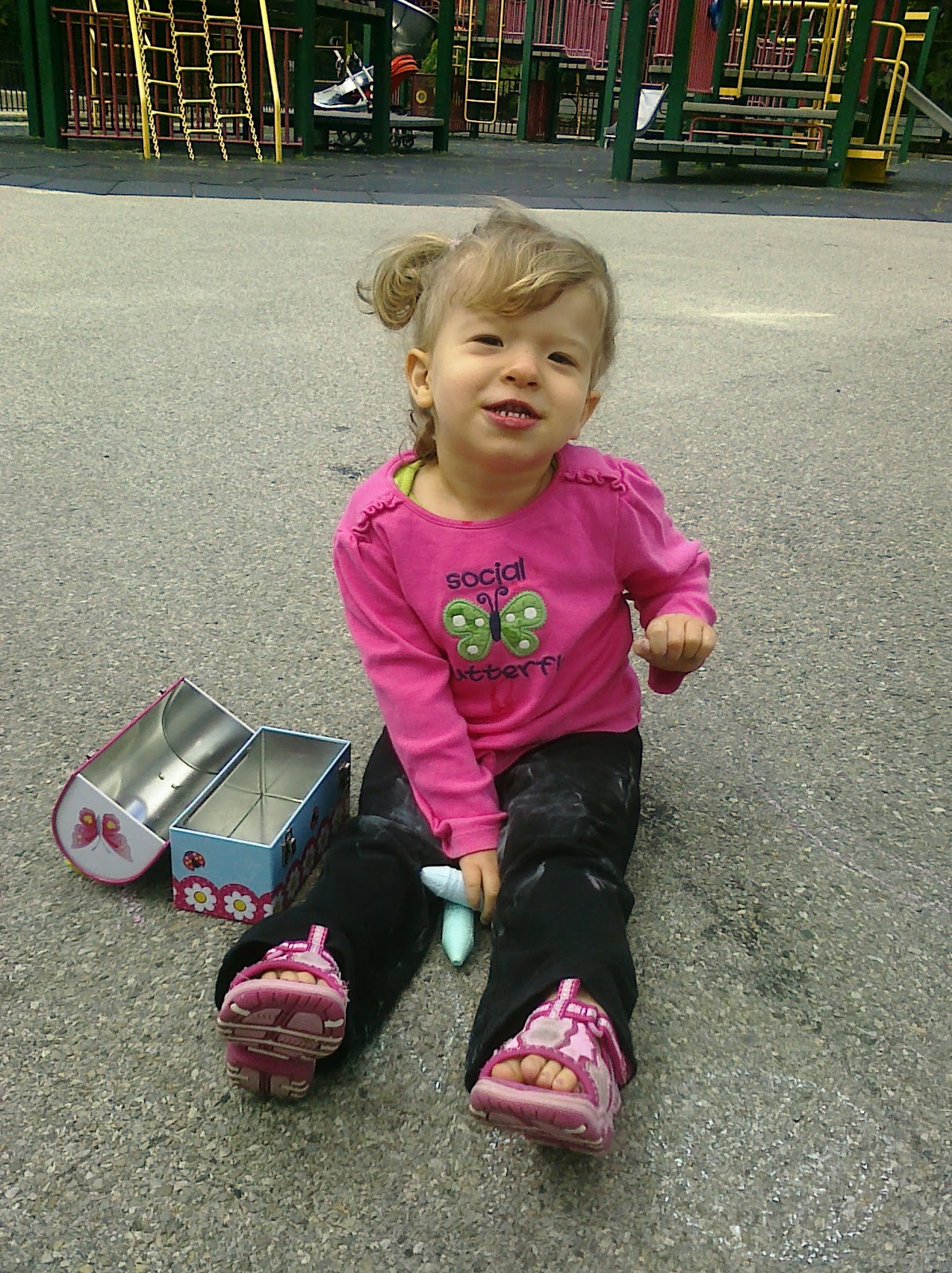 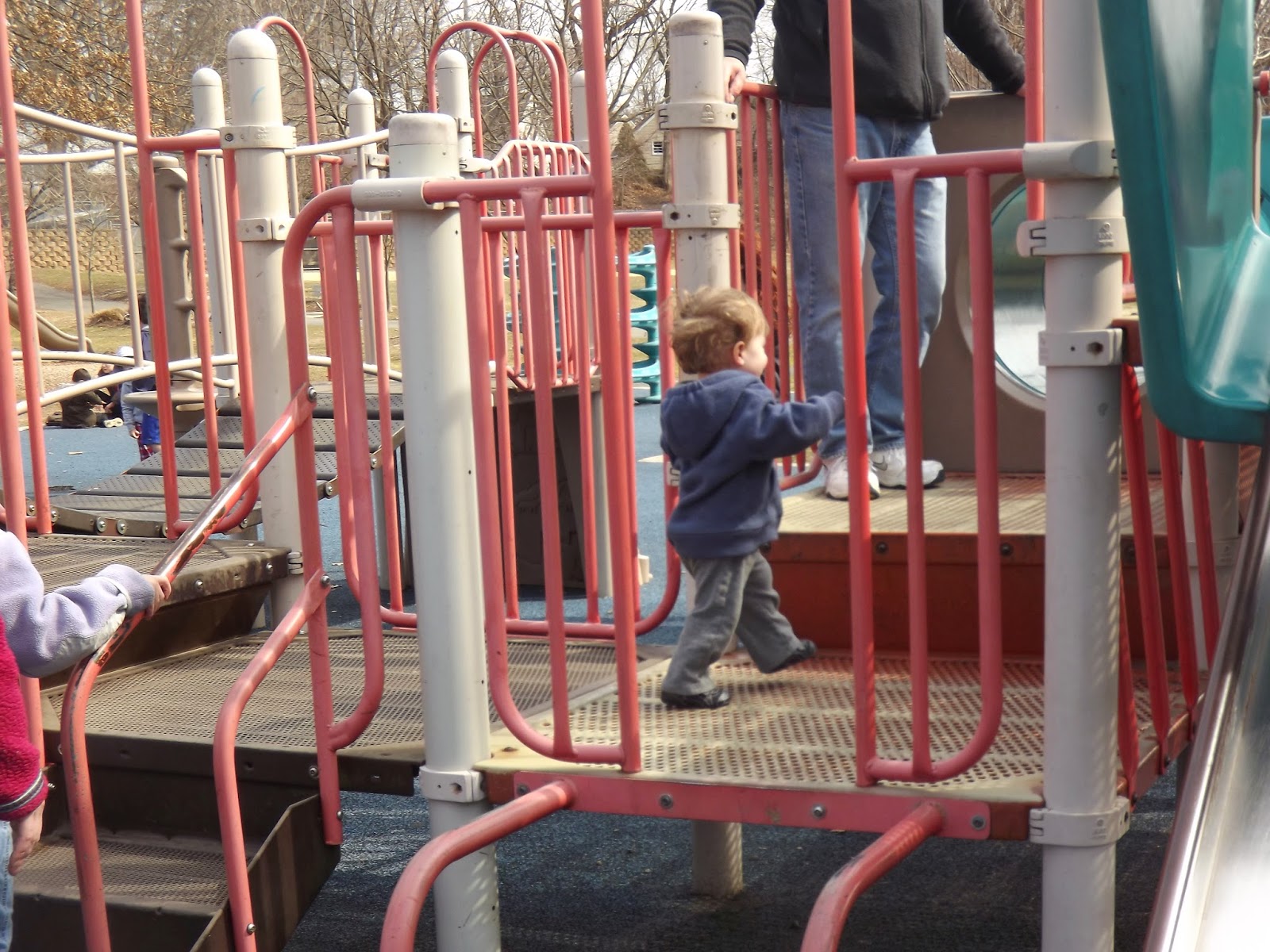 If you related to this, you might also relate to this (which is my favorite blog post, ever) and this (other playground reflections).

This made me cry a little. Also, I'm trying to remember back to when I saw you at the playground, and whether Alice played with Maya or not and if you and I talked about anything? I do remember being conscious of Maya's efforts on the playground and marveling at what she was able to do, and not thinking about what she couldn't do.

Amen, mama. Amen. I too am re-living so many pieces of our yesteryear with Sammie with my typical Mia. Mia is in daycare, and I found myself - very early on - making sure at daycare parent events that I stayed at the fringes, that I wasn't too friendly because I didn't want to have those typical mom conversations. I didn't want to talk about who was walking already, who wasn't, or how fast Mia already was. And deep down, standing on the fringes hurt like hell. No words to comfort you, just a big fat "me too." Me too.

There is pain. But there is healing. And how lucky that we get to be a part of such different stories. First our Maya/Sammie; now our Mia/Will. And how lucky are our kids that they get the siblings they do. For their worlds are richer because of it. I'm sure of it. And so are ours.

I loved this post, I totally can relate to this remembering my middle boy crawling around the playground long after the other children were running around and all the feelings that come along with it.

Now off to read the other posts you linked up there, its great to discover your blog!

Wow, this hit home for me. I have a 14 year old with Autism and Duchenne Muscular Dystrophy....and a healthy, typical 4 year old. I saw myself in this blog post, as I watch my 4 year old blossom, learn, and grow...and I watch my 14 year old lose strength and abilities as his DMD progresses. So many conflicting feelings, grateful that my little one will not face the same struggles, yet sad that my older one has to watch his brother grow, develop and gain independence while he loses independence.

This post touched me...but what I was left with and what remains in my mind are the photos that you posted at the end. And while I am sure these photos were selected with care...what they say is important. That whether it was Maya or Will they were happy at the park. Their experiences were different but they were there challenging themselves, having fun and spending time with mom.

I can totally relate! I'm going through this now with my second child. It's SO bitter sweet! Such a weird feeling!
Thanks for sharing & putting everything into words in such a perfect way!

I love the "ghost" metaphor. I have "ghosts" of everything past it seems watching my son do all the things so easily that it took my daughter years and therapy to do. I am constantly in awe of him. My husband and I both are. I struggle with being so proud of my son, and then feeling so bad for my daughter. I wonder if these ghosts will always haunt us.

Oh Dana - I remember reading a little while ago you saying something to the effect that Rob Rummel-Hudson was a real writer unlike yourself. Oh but I want to say you are a writer Dana you have such a beautiful way with words.Thank you for your post and for your blog