Parker, then and now


We got Parker in April of 2010.  His acquisition was the culmination of a few frenzied months of research, phone calls, emails, and paperwork.  At the time we were seeing a feeding therapist twice a week.  She had a little, fluffy, hypoallergenic dog in her office, and when Maya would become exhausted or cranky (which was often the way during long bouts of oral motor exercises) we would enlist Sammy (the dog) to run around, chase a toy, etc.  Maya would collapse into giggles, reset herself, and we would move on.

Dave accompanied us to a session one day while he was on a work vacation, and we joked “if only we had a dog at home.”  We live in a dog-free building.  About 5 minutes later we had decided that maybe we could petition the board for permission to get a dog for Maya.  About 10 minutes after that I had a tentative plan, and by the next morning it was full steam ahead.  I put together a proposal with letters from doctors and therapists, we got approval from the board, and we found the perfect puppy.  (Well, it wasn’t quite that fast, it took a little over a month.)

The specific puppy plan evolved rapidly. First, I wanted to get a dog from a service organization, but after a few days of phone calls I realized that the wait lists were long (about 18 months) and the process was complicated.  Being the instant gratification type of girl that I am, that was no good.  Truthfully, I wanted a dog asap---I wanted Maya to be able to lean on a dog as she stood and wobbled.  I wanted a dog who I could have take slow steps so that Maya would step along with him.  I wanted a dog at home to motivate her during the (innumerable) home therapy sessions that she was having.  I wanted a dog now.

I decided that a standard poodle was the ideal dog (smart, loving, gentle, and as hypoallergenic as dogs come) and emailed breeders up and down the east coast, explaining our situation and the exact personality that I was looking for (sweet, calm, not nervous or dominant, gentle but curious).  We found the most lovely family who had the perfect puppy for us and we got him.  He was Maya’s BFF, and I loved watching them grow together. 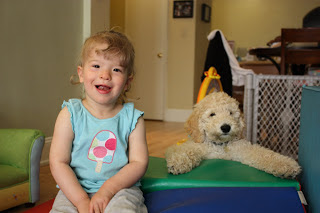 in the beginning they were both little 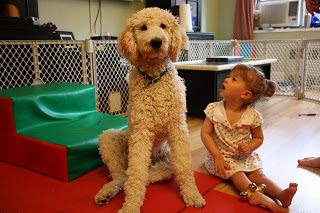 Parker, when did you get so tall?

But as Maya grew and progressed, my goals for Parker changed.  As she started to walk independently it was clear that he wouldn’t be needed in as much of a service role as I was preparing for.  He wouldn’t need to help her walk, to wear a brace that she could hold onto to take steps.  And his path shifted a bit, from service/therapy to therapy.

I get emails about Parker every so often—how is he, what does he do for Maya, where did we have him trained, etc. and so I thought it would be nice to explain and show a few examples of how he helps her out.  I trained him myself.  Parker and Maya adore each other, and they play at home like any kid would with her dog (throwing toys, giving hugs, etc).  In addition, he provides some extra motivation and companionship when Maya needs a little extra nudge. Here are a few recent examples:

1. He cheers her up when she gets off of the bus.  Every day he waits for the bus to come, and greets her enthusiastically.  While this is pretty typical stuff for a dog, it’s especially useful for me, because Maya loves the bus and is generally pretty disappointed to see me and have to get off the bus.  Parker jumps around and sniffs her and nudges her and wags his tail and it helps.

2. He helps when she doesn’t want to go inside.  Step one: get her happily off the bus.  Step two: get her into the building.  I could just pick her up, but that’s not really teaching anything.  It’s much more effective to have Parker help convince her to move along.  Here's an example:


3. He helps when she needs to work on skills and she really doesn’t want to.  Maya and the stairs have been enemies for a long, long time.  The folks at school have been trying to get her to practice walking up and down the stairs and she refuses.  Like, she’ll flat out just sit at the bottom of the stairs and not move.  So we’ve been working on it at home with strategically placed bowls of raisins, and she’s been practicing (climb a flight, eat some raisins, etc).  After 2 weeks she hit a wall at home and lost interest.  She told me that she didn’t want to practice the stairs.  Enter Parker, the ultimate silly motivator.

After he got her excited to work on the stairs again we had them walk together---and it was the first time that we’ve gotten her to try working on the stairs with only one hand on the railing (typically she’s desperately clinging with both hands).  This is definitely something that we’ll do again to practice using one hand.  And major props to Parker, who isn’t a fan of stopped mid-flight, but does it anyway.

So that’s some info on Parker, in a nutshell.  He’s a wonderful dog and a great companion for Maya.
And I think he’ll be buddies with Will, too. 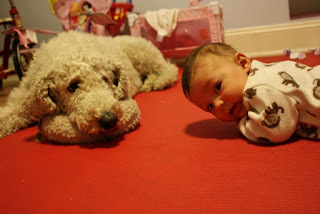 Maya and Parker are both pretty awesome. In case you didn't know...

Thank you for making my day Dana! You truly did get a wonderful puppy and now look at him , 3 years old with his new baby brother Will! I am so proud of all of you for showing the world how wonderful these standard poodles are!

Thanks Dana for the post on Parker. I have been wondering how he has been going. He seems so wonderfully gentle and smart and sooo well trained.

Never gave a lot of thought to standard poodles being service/therapy dogs, but I don't know why not. They are hypo allergenic, do not shed like furred dogs, are strong but gentle, and they are incredibly smart and easy to train.

Found your blog quite by accident today by following a link posted on the NW Georgia Spina Bifida Support Group page. I clicked a link from there and one more link led me to your blog. I actually discovered that a friend of mine has been following your blog for a couple years when I posted a link to your blog on FB. I've spent the last couple hours reading many of your posts. In my case, I am the grandparent, not the parent but see so many things that the parents have in common, regardless of diagnoses. Thank you for your honest and heartfelt portrayal of your journey.