Today was the first day of the ISAAC 2012 conference.  Because I'm not a great hotel sleeper and I'm coughing every 6 minutes, I'm exhausted.  So I bring to you the quickest start-of-conference summary ever.

First, last night I got to meet Heidi & Renee, the ladies behind the Speak for Yourself app, which was really fun.  Here's a picture from dinner: 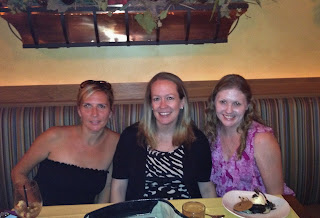 Today the Speak for Yourself team dropped a big surprise in the Exhibit Hall: the app is available for sale again---this time for Androids!  I don't really know what this means for the future, but it's exciting that the app is now available again for kids who need it.  (Personally, we are not going to jump to an android just yet---for one, our iPad is still currently working.  Second, the iPad has the accessories that we need--the AMDi case and the keyguard--which aren't available for the android---not yet, anyway.)

In other news, I got to listen to some amazing adult AAC users, hear some great presentations, and eat some delicious food. (That last part is not actually true, as the food here is oddly sparse.   Of course, the food is the least important part of that first sentence, but when you're closing in on 8 months pregnant food availability is on your mind. That's just the way it is.)

I've heard some super smart people speak, learned some interesting things, seen some stuff that I'll likely try to replicate, made a big list of "stuff to google and learn more about later", and was able to discern that I'm doing a lot of stuff right, which was nice.

Now it's time to dive into tomorrow's program with my felt-tipped pen and figure out a plan of attack.  And then to do a breathing treatment and go to sleep :) 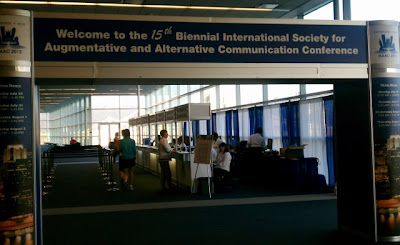 The exhibit hall, from above: 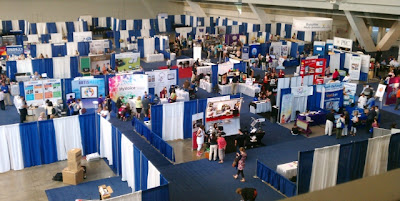 One of Maya's alligators, who needed to come with me---you know, because she said so. Or because I needed it to keep me company because I knew I'd miss her so much.  One of those two. 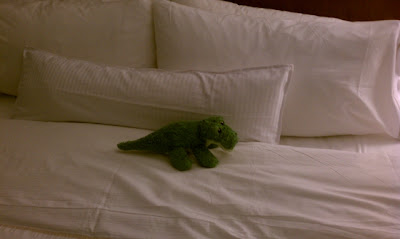 It sounds like a great start to a super conference! Learn lots and enjoy.

yay! so glad you posted an update! can't wait to hear all of your fun stories!!! :)

yay! if you see Judy LaRiviere, say hi to her b/c it will be almost like saying hi to me since she works for our Rett clinic! I know she is there b.c I spoke to her yesterday! Cool!

PS: she is a presenter!