It's been a few months now since we started using Speak for Yourself on the iPad for communication.  Maya loves it, and will nod vigorously if you ask her if she needs "the talker."  There's only one flaw to the app (and it's not just limited to this app)---accidental button pushes.  Often Maya will be reaching to touch something with her index finger, but her palm and other fingers foil her plan by bumping into the screen and hitting other buttons.  She accidentally says words, moves through screens, and closes apps that she wasn't intending to. 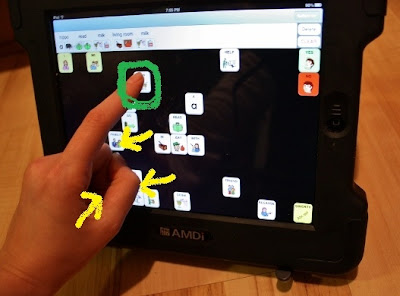 See?  My intention is to touch the green button, but my hand is bumping the screen at 3 other points, accidentally pushing things.
It's been holding her back.  She often seems to not understand how she ends up on a screen and will then just pick her favorite word to say out of the choices in front of her.  When left on her own she ends up saying things that sound like this: milk-princess-animal-Daddy-Daddy-alligator-purple-milk-cereal bar-orange.  She has a great time, but it's not as purposeful as it could be.
I've tried different things to help her with accuracy.*  Sometimes I put a finger under her wrist to hold it off the screen . . . but this doesn't work well because she gets angry that I'm interfering with her communication, and she grabs my hand and pushes it away defiantly.  I've tried holding on to her index finger to help her reach the button she's aiming for and tap it . . . but in a heartbreaking twist she's starting doing her own hand-over-hand---using her right hand to try to steady her left index finger and tap the screen.  Focused and adorable, yet somehow sad that she's trying so, so hard, and knows that she can't trust one hand on its own.
A few nights ago I had an idea, and today I finally tried it out.  It worked.  But I think it could be improved upon.  (Also, it's entirely possible--probably, even--- that other people are doing this.  I'm not claiming to have invented this idea, but I haven't seen it mentioned so I thought I'd share.)
Here's what you need:
-a pair of gloves that fits your kid
-a pair of scissors.
Step One: Cut the index finger off of the gloves.
Ta-da! 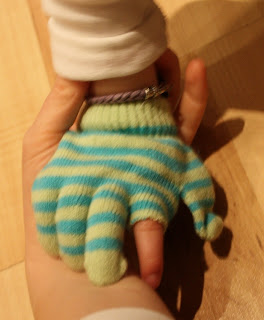 She's not thumbless.  Her thumb is buddied up in the index finger slot.
The gloves won't activate the screen.  Adults in cold climates are all too familiar with this, as you can't use your touchscreen phone with gloves unless you have special gloves.  So the only part of her hand that can now effectiely touch a button is her index finger. 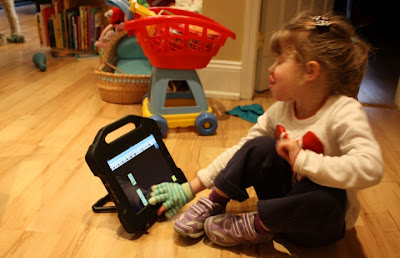 The three fingers that are currently on the screen can't hit any buttons. 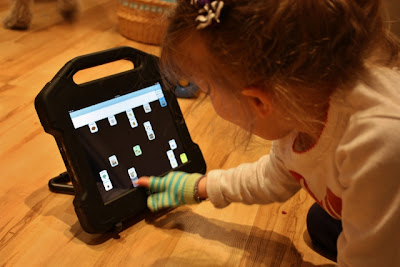 Using her pointer finger to hit a button. 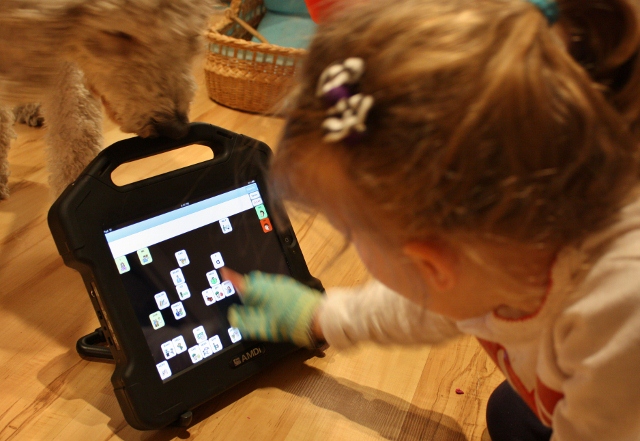 This is the best picture, because her knuckles and the heel of her hand are actually resting on the iPad, but not activating any buttons!  She's able to take the time to line up her index finger and hit the button that she is intending to. Success!
Pros:
1. It works.  (Only one pro, but it's the biggest one ever.)
Cons:
1. She has to keep it on.  She managed to for a while tonight, but then wanted to take it on and off.
2. She has to not eat it.  She likes to chew on stuff, and I can see the glove becoming a target.
3. We will need several pairs.  These are going to get dirty and I'll need back-up pairs.
4. The material isn't ideal-it's thick and bulky.
If I could design the ideal glove, here's what it would be like:**
1. Thin, stretchy fabric: something like nylon?  It would be lighter, more smooth, and less fun to chew.
2. Index finger missing or reinforced with conductive thread (which works on touchscreens). (I think fingerless is easier for her at this stage, though.)
3. Toddler and child sizes available
Eventually, you would want to cut the thumb out too, for apps that involves stretching or pinching things (you know, that motion with the thumb and index finger)---but right now Maya needs to have as little activating surface area as possible showing.
It's not a perfect solution, but it's a start.
*The creators of SfY are working on a keyguard that will help to address the issue of accidental button hits, but I'm trying to come up with something in the meantime.
**If you have any ideas on how I can make better gloves at home, let me know.  I don't sew.  This is foreign to me.
Posted by Dana at 3/06/2012 08:16:00 PM

This is a fantastic solution! Love it!

Have you ever seen those gloves that you put on after you put lotion on your hands to keep moisture in? Think I got mine at bed bath and beyond. They are small so they fit tightly and thin. They fit my 6 year old and think they might be close to what you are thinking! Brilliant plan!

She might be more likely to keep it on if it's a princess glove, lol.

Perhaps these would work? http://www.amazon.com/Zoogster-Costumes-Child-Cotton-Gloves/dp/B003V0ZQDM If they don't, then you have part of a mime costume all ready to go!

This company makes custom made pressure garments, the material they use sounds somewhat like what you are looking for.
http://www.bio-con.com/redikidgloves.html

Someone already mentioned it, but how about "princess gloves"?!?

I've been trying out football receiver gloves and it's been great so far..with cutting out the finger holes when needed. I'm not sure what to do with her hand size outside of finding a retailer of sports equipment that specializes in childs' sizes...They've got to be out there, right? :) Good luck and, as always, let us know what you find!

I googled child handbell gloves and this was one of the options - http://www.amazon.com/Go-Gloves-White-Cotton-Parade/dp/B000BMS22U

How about gloves for runners?

I read frequently, but have never commented - until now. :) I just was struck, as I read this, by how amazingly God knew what he was doing when he put you and Maya together! You are so creative and tireless in your efforts for her. She's such a dear girl. You rock!

Thank you!! I have been trying to solve this problem for my son who has CP. I will be trying this very soon - as soon as I go buy some gloves :-)

Outstanding! Know just the child(ren) who can benefit from this!

I would try "tea party" gloves...the little white gloves that little girls used to wear for tea parties long ago. They are thin (typically cotton), white, and cute. You could dress them up with cute bows or whatever to make them more attractive for her too. We have used these for students in our school before for a variety of reasons. Good luck! Great idea!

What about dressy Easter gloves? Target has em in the dollar section right now :-)

What a great idea!!

Thanks for all of the great glove suggestions---I got some on the Facebook page, too! We're getting a pair today and I'll let everyone know if they work :)

Necessity definitely gets the creativity flowing. I've been there with my son. If you need an alternative & possibly cheaper solution, what about the fabric used for dance body sox. You'd have a choice of colors & its light-weight, breathable and I wouldn't think Maya would care for the texture to chew.

Share your idea to Moms who read Chinese.Copy some of you photo and article. Thanks!

Have you ever tried a tube sock with a hole cut out for the index finger? It may be less bulky, can help teach ability to keep the rest of the hand closed.

I am running into a similar problem with a student I work with. Thank you for sharing. What a great idea! She is so lucky to have you for a mom :-)

Why is it heartbreaking that she does her own "hand over hand"? I do that very often.

Excellent Blog! I would like to thank you for the efforts you have made in writing this post.
바카라사이트

It is very well written, and your points are well-expressed. I request you warmly, please, don’t ever stop writing.
바카라사이트