This is a video of nothing particularly interesting.

Now I bet that you're dying to watch it, right?

I realized yesterday that it's been a while since I got video of Maya and I chatting, or using AAC, or really anything. This is due to the fact that she generally strongly protests to sitting and being video'd, I generally honor her request not to be recorded (because, you know, right to privacy). I set up the tripod yesterday while Will was napping and eventually persuaded her to hang out and chat and let me record a little.

Here's a brief summary of the recording (spoiler alert): we chatted about things to do during the last few days left of our break, and then Will wakes up and we look at him on the video monitor.

It's not really noteworthy, but also it's a good representation of what our home communication looks like. Maya is an AAC user, but she's also a speaker, a gesturer, a user of facial expressions and some intonation. In choosing to honor total communication, we mostly let her choose the method she wants (typically, a combination of methods) to get her point across (the mostly is because she sometimes needs prompting or questioning to know that her message wasn't clearly received, and she needs to use a different method to help clarify).

You might notice that I'm not doing a lot of modeling. If you're an AAC professional (or experienced AAC family) then you know that modeling language is basically the most important thing that any communication partner can do for an AAC user . . . and you might be wondering why I'm not modeling more. The answer is kind of two-part, but it really boils down to knowing my kid: First, I don't always model everything when I talk to Maya. She knows where a lot of vocabulary is, and if she's very interested in a conversation and I start to over-model, she gets fidgety and bored and wanders off. Second, the video camera + over-modeling combination feels kind of like a contrived activity, rather than what a spontaneously multi-modal conversation really feels like. You'll see that at the end when I'm trying to prompt for synonyms she gets tired, physically starts to move away, and keeps saying "no"----we would have hit that exhaustion/rejection sooner if I was trying to make it more "teachable" and less "conversational".

Some things worth noting: 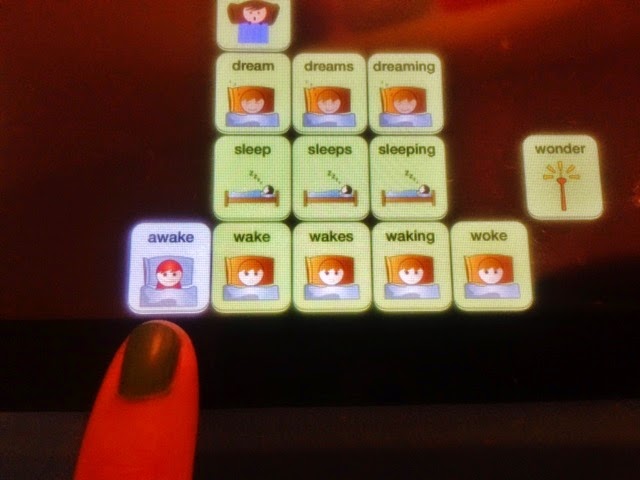 she chose "woke" on the far right

This is awesome... Love it! Thank you

I totally understand the problem with over-modeling. At some point, you'd want your child to just chat and not be in "therapy" all the time. At least, I, being an adult with communication difficulties, would not like to e constantly in a forced learning situation.

I think Maya's speech has improved since the days of the week clip from a while back. I can hear more middle consonants. Good job Maya!