Counting for fish, and counting fish

As of this weekend, we are suddenly all fish, all the time.

We decided to take another shot at potty training, this time with a new plan.  We told Maya that if she can fill up her whole sticker chart with stickers (earned when she uses the potty) then she can get a pet fish.  Dave got a 10 gallon tank down from the closet (because when you're a zoology lady, you always have at least one 10 gallon tank tucked away somewhere) and we put it on the bookcase in her room.  She is so excited.  After she earned 5 stickers, we put water in the tank.  10 stickers will earn her some new glow-in-the-dark stars for her ceiling.  Other little rewards will be built in along the way (trips to the pet store to pick out gravel, plants, etc).  We're only on Day 4, so it's too early to say whether this will be the magic thing that works, but so far it's definitely working better than anything that we've tried before. 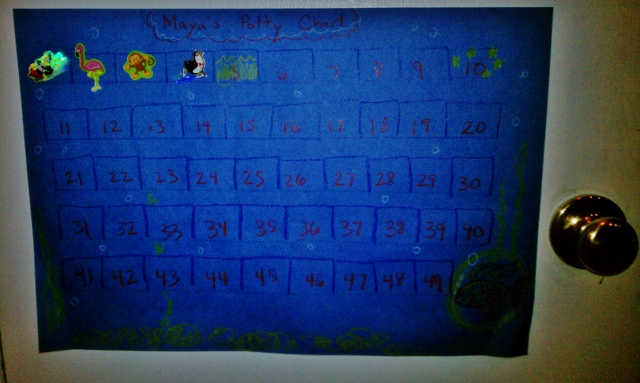 It's not a great picture, but you get the idea. As of last night, she's up to 8 stickers. She also gets m&ms every time she gets a sticker.

Because we're hyping up the fish, we've been looking at a lot of fish pictures.  I printed some out to hang on the bathroom door, and printed an extra one for her to take to school and show off.  On Monday morning, as we were waiting for the bus, I shot a quick video of Maya counting the fish pictures on her paper.  I point at each picture and she says the numbers.

Besides being adorable, the video is impressive because she's been making so. many. sounds.  In the past 6 months she's had a vocalization explosion.  She used to be mostly silent, only making noises for things that she knew how to say (like dada or buh (bus))---but suddenly she's trying to imitate everything.  6 months ago she only had one vowel sound, now she has several.  It's especially cute and brings with it a lot of hope for the future---as her approximations get more accurate, others can understand her speech better, and that's really good for her.  She loves saying "hi!" and having someone say "hi" back---it's clearly exciting for her to use her voice and have someone respond.

Here it is, Maya counting (with subtitles):

I couldn't help but tear up! And I don't think it's pregnancy hormones either. Way to go, Maya!

Way to go Maya! She is completely awesome!! :)

I read your last post, and I just wanted to say that anyone evaluating her should be watching these videos as part of the process. It's not just that she can count. It's the evidence of her receptive language that is so clear here. Watch the remarkable speed of her processing what you are asking her to do. Not just here but in all the videos. That alone has to tell someone about her high level of intelligence. The first evaluators failed to gather the evidence that was right there for the having!

How wonderful! Honestly brought tears to my eyes. All of your dedicated, hard work is rewarded by those sweet little words :)

Nice counting! And you hardly needed the subtitles. I would love to gift our goldfish to Maya when she fills her chart!

Love the potty chart, we are using something similar but its a calendar that we put stickers on when he is successful. I've been following your blog for some time and just a headsup I recently added a link to it on my blog! Keep up the good work