The Silencing of Maya

(Edited on 6/19/12 to add: A petition is now up on change.org asking that Speak for Yourself be returned to the App Store immediately and allowed to remain there throughout litigation and regardless of the lawsuit results. Business disputes should have business resolutions, and those who need this app to communicate should be assured that they will not lose it. If you agree, please sign and share like crazy. Thanks!)


Eleven weeks ago I wrote about a lawsuit that posed a threat to my daughter’s voice.  Maya, who is four years old and unable to speak, uses an app called Speak for Yourself (SfY) to communicate, and the creators of SfY were being sued for patent infringement by Prentke Romich Company (PRC) and Semantic Compaction Systems (SCS), two much larger companies that make designated communication devices (not iPad apps).  You can read the original post here, and see the numerous news articles that were spurred by this case here.  Maya was poised to become a very real, very human, and very adorable casualty of patent law.

After that blog post, two big things happened. First, I learned a tiny bit about patent law, most notably that while in the worst case scenario (for us, a verdict again Speak for Yourself) the judge could shut down the app, it was also quite possible that PRC/SCS would only be awarded monetary damages.  I was able to relax a little and lose some of the terror that SfY (which Maya was already relying on) would be suddenly yanked away or disappear.  The second, and far more exciting development, is that Maya’s progress in using the app to communicate has been staggering. In my original post I imagined a future in which I could hear Maya “speak” in phrases and share her thoughts . . . now, only weeks later, we are living that future.  She politely makes requests, tapping out “I want cookie please.” She makes jokes, like looking out the window at the bright sunshine and tapping “today rain” and laughing (what can I say, 4 year olds don’t tell the best jokes).  And two days ago she looked at my husband as he walked by and tapped “Daddy, I love you.”

Maya can speak to us, clearly, for the first time in her life.  We are hanging on her every word.  We’ve learned that she loves talking about the days of the week, is weirdly interested in the weather, and likes to pretend that her toy princesses are driving the bus to school (sometimes) and to work (other times).  This app has not only allowed her to communicate her needs, but her thoughts as well.  It’s given us the gift of getting to know our child on a totally different level.  I’ve been so busy embracing this new reality and celebrating that I kind of forgot that there was an ongoing lawsuit.

Until last Monday.  When Speak for Yourself was removed from the iTunes store.

It disappeared.  It no longer exists.

According to this court document, here’s how this happened: PRC/SCS contacted Apple and requested that Speak for Yourself be removed from the iTunes store, claiming that it infringes on their patents.  In turn, Apple contacted SfY and requested their response to these claims.  The lawyer for SfY responded, explaining to Apple exactly why the infringement claims are unfounded, referring Apple to the current open court case, and pointing out that PRC/SCS had not asked the court for an injunction ordering the app to be removed from the store.  For months, nothing happened . . . and then on June 4th Apple notified SfY that the app had been removed, due to the fact that the dispute with PRC/SCS had not been resolved.

So now what will happen to Maya’s voice?

To get a little less impartial, I also don’t understand how Prentke Romich could think that this was a reasonable, or ethical, move to make.  PRC is a 46 year old company whose entire client population is comprised of children and adults who are unable to speak.   Their motto (prominently displayed atop their Facebook page) is “We Believe Everyone Deserves A Voice.”  How can they reconcile their mission statement with their strategic removal of Speak for Yourself from the market, effectively blocking access to new nonverbal users and potentially causing the removal of the app from the current users who are using it as their only voice?

My daughter cannot speak without this app.

No one should have the power to take this away from her.

What would happen if we lost SfY? I have no idea. As I’ve explained before, we have tried other communication apps and didn’t find any that were a good match for Maya.  Interestingly, we also carefully considered purchasing a communication device from PRC, and met with one of their representatives in November, nine weeks before a post on my Facebook wall introduced me to SfY (and seven weeks before it even existed in the iTunes store).  We examined PRC’s devices and were disappointed to see that they weren’t a good fit for Maya.  For us, this wasn’t an issue of an expensive device versus a “cheap” app.  This was an issue of an ineffective device (for Maya) versus an app that she understood and embraced immediately.  The only app, the only system, that she immediately adopted as her own way of communicating.

This app is her only voice.

The fact that my daughter’s ability to speak is becoming a casualty of a patent battle between two businesses is beyond my comprehension.  This is a patent issue, a monetary issue, a legal issue, a business issue.  This should be handled in a business vs. business way, within the court system.  PRC’s decision to fight for the removal of this app from the iTunes store isn’t just an aggressive move against Speak for Yourself, it’s an attack on my child, the other children using this app, and the children who are ready to begin using this app but now cannot. 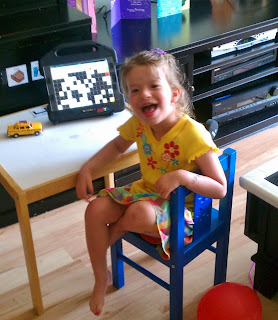 Maya, talking to me after school

If you would like to lend your voice to this fight, spread this story.  This is not ok, and people should know about it.  If you are compelled to voice your opinion, here are some places that may interest you:

Edited on 6/13/12 to add:  Author's Note: I have added a new post answering some of the frequently asked questions spurred by this post.  That post can be seen here.

Edited on 6/14/12 to add: A petition is now up on change.org asking that Speak for Yourself be returned to the App Store immediately and allowed to remain there throughout litigation and regardless of the lawsuit results. Business disputes should have business resolutions, and those who need this app to communicate should be assured that they will not lose it. If you agree, please sign and share. Thanks!